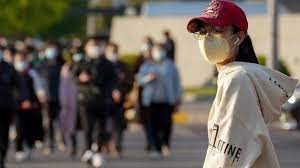 BEIJING, June 24 : China is furious at President Biden’s request that the CIA investigates China’s link to the virus.

According to a report carried by Gwadar Pro, Shabana Syed a print and TV journalist based in Britain in an article referred to a writeup published in China’s ‘Global Times’, that has likened Biden’s search for origins of the pandemic to the US’s efforts to find Iraq’s Weapons of Mass Destruction, though fabricated dossiers.

The report says, China has accused the US of taking a ‘dangerous stance’ and warned Washington ‘could meet its Waterloo in this battle’.

In retaliation, China’s Foreign Ministry Spokesperson Zhao Lijian has also called on the US to give a full clarification on its bio-military activities.

Since the outbreak of Coronavirus in late 2019, the internet is rife with questions regarding the origin of the virus, and three scenarios could be a probability: it was natural from bats to humans; it occurred because of leaks from a Wuhan lab in China; it was a biological warfare attack.

The World Health Organisation (WHO) affirmed the first theory and discredited the second one after it investigated and affirmed it was “extremely unlikely” that the Virus was from a lab leak in Wuhan China.

However, the last one needs an examination of the possibility of Coronavirus being part of biological warfare, a notion continually ridiculed by western media.

If any scientist or medical expert suggested biological warfare, especially in the early days of the outbreak, all posts were deleted from social media networks like Twitter and Facebook to keep the public ‘safe’. Journalist Eva Bartlett states “Twitter isn’t censoring to keep users ‘safe’, rather it is using its power to spoon-feed the world establishment narratives”.

However, the mere fact that Biden wants to re-investigate the Wuhan lab leak theory because new information has been unearthed by US intelligence agencies, has inadvertently reignited the biological warfare attack theory.

A theory that mainstream media has ridiculed, especially after Iran and Russia have stated it as a “possibility”. Iran’s General Salami claimed “it was possible that the global coronavirus outbreak was the result of a US biological warfare attack on China” by the US spreading to the rest of the world.

General Salami may have a point since no logical explanation has been given to the fact that if the Virus was natural and spread through human contact, how, after an outbreak in China the virus instead of spreading to the nearest country, jumps over Afghanistan,  Pakistan, Turkmenistan and maybe a few other countries and made a deadly attack on Iran?

It should also be noted the first two countries, the worst hit, where the outbreak took place, are the US’s main perceived enemies, China, and Iran. While Iran was battling the virus in January 2020, the US looked on imposing the worst forms of medical sanctions, so more Iranians died.

According to reports, there are over 100 or so CIA, Pentagon-sponsored clandestine and secret laboratories spread out globally which fabricate and test agents for biological warfare.

Western mainstream media is rife with China’s lab leak stories with little mention of Wuhan Institute of Virology’s strong ties to the Galveston National Laboratory in the United States.

Zhao also called on Washington to open its hundreds of labs for investigation, suggesting that the virus may have originated from a US army base in Maryland. Also the fact that US Pentagon gave USD $39 million to Dr Peter Daszak’s Eco Health Alliance, an NGO which funded coronavirus research at China’s Wuhan Institute of Virology.

Apparently, there was a leak, but not in Wuhan. According to The New York Times on 8th August 2019, a “Deadly Germ Research is Shut Down at Army Lab over concerns.” The lab was US Military’s main bio-lab at Fort Detrick, Maryland.

According to a physician in Taiwan, in August of 2019, the US had an outbreak of pneumonia and lung issues which the Americans blamed on “’vaping’ from e-cigarettes” or influenza.

Later Robert Redfield Director of the Centers for Disease Control and Prevention (CDC) admitted the US had several deaths from Covid-19 which had been misdiagnosed as influenza. However, after this outbreak, the US did send its soldiers to Wuhan Military Games for the October 2019 games.

At the same time, the Johns Hopkins Center for Health Security in partnership with the World Economic Forum and Bill and Melinda Gates Foundation hosted, a high-level pandemic exercise on October 18, 2019, in New York, where experts agreed that it is only a matter of time before one of these epidemics become global with catastrophic consequences.

According to an article on March 4th 2020 by Professor Larry Romanoff, titled “Did the Virus originate in the US”, “epidemiologists and pharmacologists from Japan and Taiwan, China have determined that the new coronavirus could have originated in the US since that country is the only one known to have all five types – from which all others must have descended.

Wuhan in China has only one of those types, rendering it in analogy as a kind of ‘branch’ which cannot exist by itself but must have grown from a ‘tree’.

China’s remarks that the US is taking a ‘dangerous stance’ and ‘could meet its Waterloo’ in this battle’ was a warning to Biden. Chinese officials state that by attempting to politicize the outbreak and malign China, the US is opening a pandora’s box.

The US has been developing germ warfare for decades according to a report in September 2016 in ‘Business Insider’, which states the US military has conducted dangerous biowarfare experiments on Americans for the past twenty years. Dr Leonard Cole documented over 239 of these tests on Americans in his book “Clouds of Secrecy: The Army’s Germ Warfare Tests Over- Populated Areas”.

Stephan Ledman’s article published on 28 July 2008 and reported by the London Guardian states that the Fort Detrick facility is a “vast germ warfare laboratory”, which produces and “stockpiles the world’s most lethal bacteria and viruses” forbidden by the 1989 US Biological Weapons Anti-Terrorism Act.

Zhao may have a point when he states “the US’s one aim is to use the pandemic to pursue stigmatisation and political manipulation to shift the blame. They are being disrespectful to science, irresponsible to people’s lives, and counterproductive to concerted global efforts to fight the virus.”

The hybrid trade war against China by the US cannot be ignored, while Biden awaits the CIA report highlighting China’s link to the outbreak of the virus.

There are rising suspicions that this decision by the US’s allies is based on the US’s containment of China policy and nothing to do with Chinese vaccines.

China has successfully controlled the spread of Coronavirus; the country has had no further lockdowns and its economy has bounced back stronger than before.

While western countries have three lockdowns a year, high rates of Coronavirus, and their economies are in shambles with mass protests and riots in the streets, the report added.