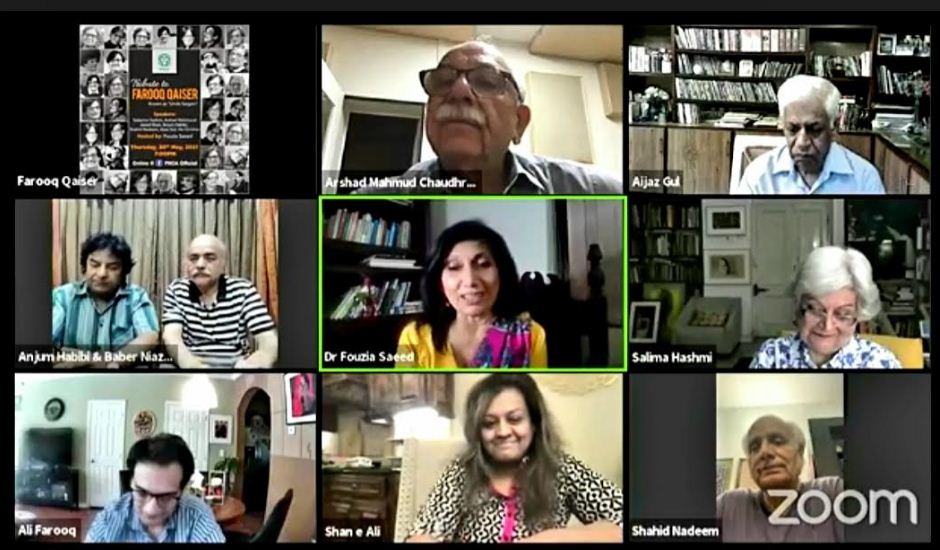 ISLAMABAD, MAY 21 – The one the only Farooq Qasir was remembered in an on-line reference arranged by Pakistan National Council of the Arts. The session hosted by DG, PNCA Dr. Fouzia Saeed a close friend and fan of Farooq was attended by Uncle sargum friends and family members. In her opening remarks Dr. Fouzia Saeed eulogized his contribution towards art and humanity. These days we lost a large number of grate names of the art world but Farooq Qasir departure is felt differently. He was unique in his writing, acting, friendship and love for the oppressed. “Though we are saying good by to you but you are with us and will remain all the time” she added.

I think it’s not possible for any one to forget him. He not only worked with his team but lived with them and shared the good and bade of life. The whole society have reflected their love and respect for him. Arshed Mehmood Ch. One of his colleague said that sweetness of Farooq is unmatchable and unforgettable. Actually, I was the uncle sargum because it was my skitch and I was to compose music for it thus the character was named uncle sargam. He was a great writer and was spontaneous in all segments of his life. Salema Hashami paid tribute to Farooq Qasir. She said basically he was a great humanist and he wrote and work for the welfare of the people. He never dares to portray the follies of ruling elites.

His medium of expression was so attractive and digestive that everyone acknowledged and enjoyed it. Shahid Mehmood Nadeem writer and director expressed his love and attachment and said we wrote for the common people to educate them about their issues and to highlight the wrong doings and exploitation of the ruling class. His art was to convey a message in a very simple way. Ajaz Gul, Film critic said that Farooq Qasir was a great artist. We both were in NCA.

He films and was having great knowledge about the film worked. His daughter Shan and sun Ali remembered their caring fathers love. His love for the children and young generation can never be expressed in words. He used to consider children as the best teacher. His only moto was to educate society. Babar Naizi and Anjum Habib both narrated their story of interaction with the great artist. He was a great teacher. What we are today is because of him. we lived like family members. They shared their daily life routine and great moments of their life with the listeners.

Our daily late setting with him was a source of learning. Tina Sani her massage said I have work with him and I have sung a lot of his songs for her children. He will remain with us for a long. The participants highlighted the life and contribution of uncle sargam and said he was the only and one and there may not be another Farooq Qasir in centuries ahead.