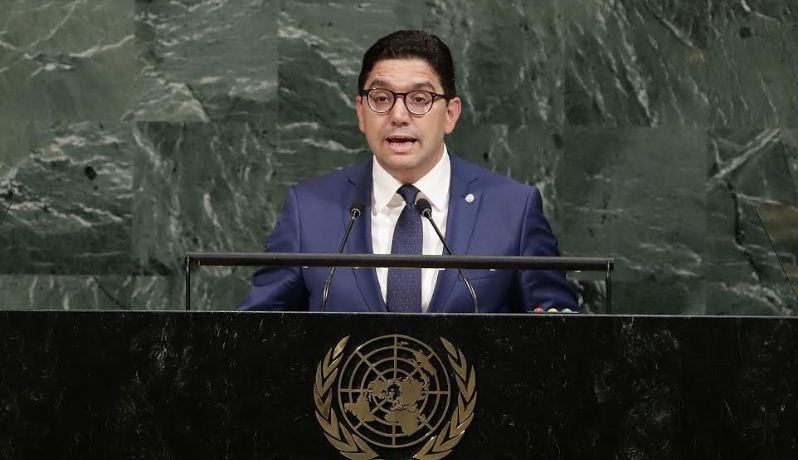 Foreign Minister Nasser Bourita says His Majesty the King firmly opposes any attempt to change the legal and historic status of Al-Quds and Al-Aqsa Mosque and to undermine the tranquility of the populations of the holy places, in addition to the illegal eviction of residents of the Sheikh Jarrah neighborhood

NEW YORK: Minister of Foreign Affairs, African Cooperation and Moroccans Expatriates, Nasser Bourita, reaffirmed at a meeting of the General Assembly of the United Nations, the unwavering commitment of His Majesty King Mohammed VI, Chairman of Al-Quds Committee, to the Palestinian cause and to peace and stability in the Middle East.

His Majesty the King firmly opposes any attempt to change the legal and historic status of Al-Quds and Al-Aqsa Mosque and to undermine the tranquility of the populations of the holy places, in addition to the illegal eviction of residents of the Sheikh Jarrah neighborhood, said Bourita in an address on this occasion.

Bourita stressed that His Majesty King Mohammed VI has always insisted on the imperative to refrain from any act likely to precipitate the region towards more tensions, given that the persistence of unilateral measures and acts contrary to legality and international law only widen the gap between the two parties and jeopardize the chances of peace in the region.

In this regard, the minister recalled that His Mjesty King Mohammed VI underlines the need to preserve the Holy City as a common legacy of humanity, a land of encounter and a symbol of peaceful coexistence for the followers of the three monotheistic religions.

Mr. Bourita mentioned in this context Al-Quds Call, which was signed by His Majesty the King and His Holiness Pope Francis in Rabat on March 30, 2019. Referring to the current escalation, the minister deplored that “once again, and for the same reasons, serious acts of violence have been committed”, which claimed several lives, destroyed civilian installations and triggered more suffering, which threatens regional and international peace and security.

“The escalation of fighting and violence we are witnessing is the inevitable result of the stalemate in the peace process in the region, exacerbated by the repeated violations against the Palestinian people, and the proliferation of hate speech by ‘extremist organizations’,” Mr. Bourita said.

The minister recalled that Morocco reaffirms its full support for a just and fair peace based on international legality and the two-State solution approved by the international community, as there is no other alternative to a political solution favoring the creation of an independent, sovereign and viable Palestinian state within the borders of June 4, 1967 and with Al-Quds-East as its capital.

To this end, the Kingdom urges the international community, in particular the Security Council and the Quartet, to engage in stopping the escalation, to act actively to break the cycle of violence and to initiate intense diplomatic action in view of a peaceful settlement, in accordance with resolutions based on international legality, Mr. Bourita pointed out. The minister also stressed the urgent need for intervention by the international community to help the Palestinian people in the West Bank, Al Quds and the Gaza Strip, in order to overcome the impact of this tragic situation.

Bourita recalled that the Kingdom, following the High Instructions of His Majesty King Mohammed VI, took the initiative to send emergency humanitarian aid to the Palestinian population in the West Bank and Gaza Strip, which includes basic food products, emergency medicine and blankets. “This royal decision is part of the Kingdom’s unwavering support for the just Palestinian cause and its permanent solidarity with the brotherly Palestinian people.

It is also part of the continuation of His Majesty the King’s action, in his capacity as chairman of Al-Quds Committee, at the political and diplomatic levels but also on the ground, in particular through the Bayt Mal Al Quds Agency, for the benefit of the people of the Holy City, in order to provide them with decent means of subsistence and to support their capacities and resilience,” Bourita said.

Firmly attached to peace and stability in the Middle East, Morocco is sparing no effort to fully contribute to international efforts aimed at ending the escalation of violence and fostering a constructive dynamic for peace in the region, the minister concluded.