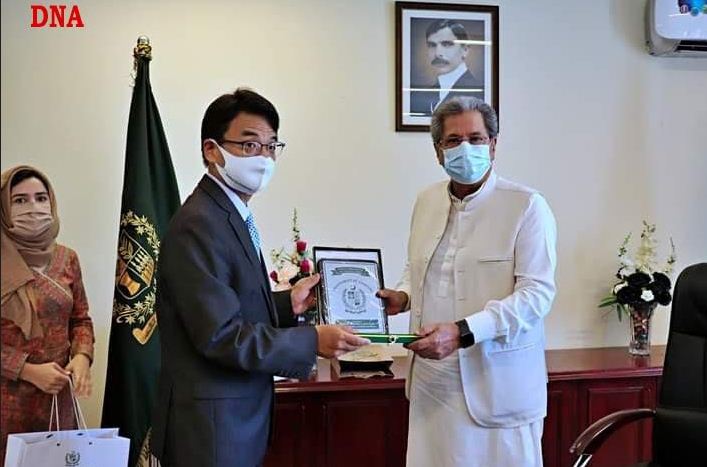 The Ambassador of the Republic of Korea, Suh Sangpyo meets Minister Shafqat Mahmood; both sides discuss enhancement of mutual cooperation as well

ISLAMABAD: The Ambassador of the Republic of Korea, Suh Sangpyo called upon the Federal Minister for National Heritage and Culture Division, and for Federal Education and Professional Training Shafqat Mahmood in Islamabad.

Shafqat Mahmood was accompanied by his core teams from both of the Ministries under his portfolio. Suh Sangpyo discussed with Shafqat Mahmood the rich Buddhist heritage that exists in Pakistan and the need for its preservation and promot ion to the world.

Ambassador Suh Sangpyo stated that through the interest and commitment of the Government of the Republic of Korea, the National Cultural Heritage Administration of the Republic of Korea is in the process of signing a Memorandum of Understanding with the National Heritage and Cultural Division of the Government of Pakistan for an initial grant of USD 4 Million that will focus upon the preservation of Gandhara Buddist Heritage.

Suh Sangpyo also shared with Shafqat Mahmood that only 1500 Pakistani graduate students are currently studying in the Republic of Korea and he sees this as an opportunity to increase the educational collaboration and student to student exchanges between both countries in the fields of IT, engineering and similar skills based educational programs that can ultimately benefit Pakistan and increase further avenues for employment for its youth.