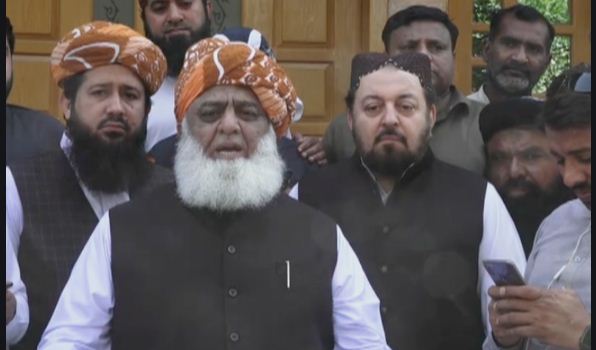 LAHORE, Mar 21 (DNA): Pakistan Democratic Movement (PDM) and Jamiat
Ulema-e-Islam-Fazl (JUI-F) Amir Maulana Fazlur Rehman has said that the
PDM is united and any attempt to sabotage it will be repelled with full
force.

Addressing a joint news conference with PML-N Vice-President Maryam
Nawaz after a detailed PDM meeting at Jati Umra in Lahore on Sunday,
Maulana Fazl said the National Accountability Bureau (NAB) has become a
tool in the hands of the rulers.

The NAB summons for Maryam Nawaz to appear before it on March 26 was an
attempt to pressurize the PML-N leader, Fazl maintained.

He said workers of all the PDM parties will accompany Maryam Nawaz to
the NAB offices on March 26.

Speaking on the occasions, Maryam Nawaz said the slot of leader of the
opposition in the Senate belongs to the PML-N.

“It was decided before the Senate elections that the seat will go to
PML-N no matter what would be the outcome of the elections and I hope
everyone will respect it,” she added.

Responding to a question about differences with Hamza Shehbaz, Maryam
said the people who are spreading these false reports should be ashamed
of their actions.

“There is no such thing between me and Hamza. He took part in every
sitting of the PDM today,” she said.

Earlier, PDM bigwigs held their meeting at Jati Umra to chalk out the
future course of action against the government including a possible long
march.

After the PPP sought more time to ponder over the issue of resignations
from the parliament, top PML-N leaders including Vice-President Maryam
Nawaz, Opposition Leader in Punjab Assembly Hamza Shehbaz and former
prime minister Shahid Khaqan Abbasi on Sunday welcomed the JUI-F supremo
and PDM President Maulana Fazlur Rehman and his delegation at Sharifs
residence at Jati Umra.

According to the TV channel, Maulana Fazl told the meeting that he would
not allow anyone to sabotage the PDM.

PML-N central leader Rana Sanaullah talking to the media before the
meeting predicted, “The PDM movement will surely succeed as this fight
against the government is between ‘good and evil’.”

Rana said that whether the PDM will be made of nine parties or three,
the movement will succeed. He demanded an investigation into what
happened to the PPP in the Senate elections. “The team which was
spearheading the senators guiding them to vote on the names of the
candidate must be investigated,” he demanded.

“Was that a mistake or conspiracy? This should be investigated because
it would be better for the PDM and the PPP as well. In my personal
opinion this was more than the mistake,” Rana Sanaullah said.

He claimed that their sit-in will break the 126-day record (of the PTI
in 2014).  The PML-N central leader also said that the one who leaked
the PDM meeting details regarding Asif Ali Zardari’s speech, had
actually damaged the PPP. The N-League leader and former law minister
certified that the long march has only been postponed until after Eid
and it was not cancelled. DNA