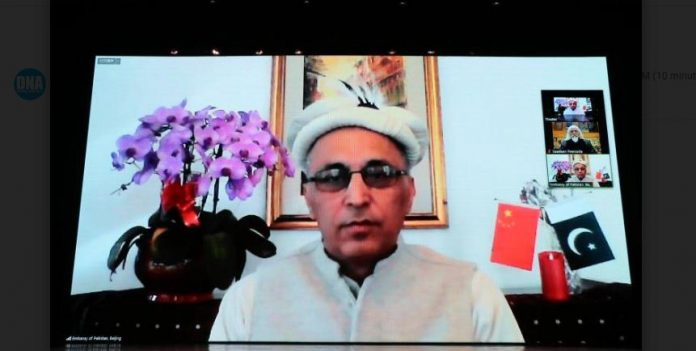 The event, which coincided with the World Puppetry Day, was one of the key highlights of a year-long celebrations to mark the 70th anniversary of the establishment of diplomatic relations between Pakistan and China.

The event was attended by a large gathering of high-ranking officials from the government departments, members of the diplomatic corps, academia, think tanks, cultural organizations, Pakistani community and Pakistani and Chinese school children.

The colourful and engaging display of cultural heritage, including puppetry, is in line with the vision of the leaders of Pakistan and China to pass on the traditional fraternal ties to the next generation and build a community of shared future in the new era. Cultural and people-to-people exchanges are vital means to foster harmony, friendship, synergies and people’s history.

The art of puppetry has progressively evolved over the course of millennia and artistically captures various facets of folk culture, fables and story-telling traditions of the two countries. The audience was particularly fascinated to observe similarities in style, technique and rendition of Pakistani and Chinese puppetry.

In his welcome remarks, Ambassador of Pakistan, Mr. MoinUlHaque, congratulated the participating organizations for showcasing the intangible cultural heritage of Pakistan and China and successful organization of the event. He emphasized that both countries were deepening their cultural linkages to elevate the all-weather strategic cooperative partnership to a new pedestal of bilateral cooperation.

Party Secretary and Chairperson of Beijing Performance and Art Group, Ms. Zhao Jiachen, President of China Puppet Arts Theater, Ms. Zhao Yongzhuang, Mr. SaadaanPeerzada, Director of the Rafi Peer Theater Workshop, and Ms. HimalchuliGurung, Programme Specialist for Culture of UNESCO spoke on the occasion. They highlighted the importance of education through entertainment and preserving the rich cultures and traditional arts for the future generations.

On the occasion, Rafi Peer Theater Workshop and China Puppet Art Theater signed an MoU for Cooperation. The two sides also exchanged puppets depicting popular characters from their folklore and mythology for the respective museums.

Rafi Peer Theatre Workshop is involved in Puppetry in Pakistan since 1978. The Workshop has done 30 International Puppet Festivals which brought almost 230 International Groups from 56 countries to Pakistan. Rafi Peer Museum is also the First Puppet Museum of its kind in South Asia which is built over 44000 sq feet with a display of Puppets from around 36 countries.China Puppet Art Theatre is keeping the tradition of puppetry alive since 1955 and its depiction of world-renowned folklore of Monkey King has won it laurels.

Pakistan and China have planned more than hundred activities and events throughout 2021 to celebrate their multifaceted cooperative partnership and ironclad friendship.