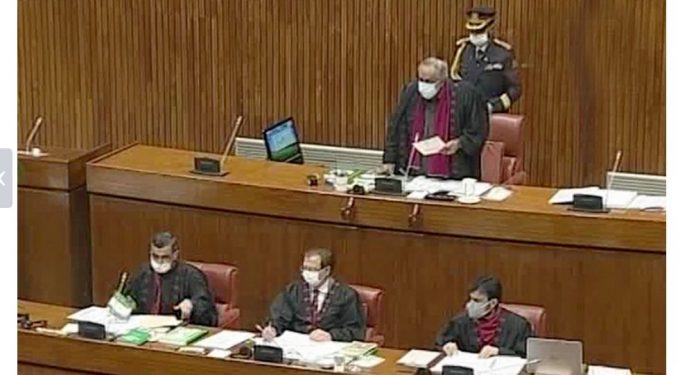 ISLAMABAD, MAR 12 – Voting for electing the Senate chairman and the deputy has begun as the opposition and the government on Friday continued to trade barbs over “hidden” cameras found at the polling booth earlier in the day.

Polling officers are currently calling senators in alphabetical order of their names to cast their votes. Polling will continue until 5pm.

JUI-F’s Maulana Abdul Ghafoor Haideri was the first senator to be called to make his choice.

Syed Muzaffar Hussain Shah, who is presiding over the session and earlier administered the oath to all 48 newly elected members of the Upper House, read out the names of the candidates contesting for the positions as well as the senators sponsoring them.

Shah also directed that a body be formed comprising equal number of senators from the government and the opposition to investigate the matter of “hidden” cameras found earlier in the session.

“Recovered items like cameras and otherwise, will be secured and sealed till the final disposal of the matter,” he said.

He further said a new polling booth had been established and asked representatives from both sides to inspect them.

Who do the numbers favour?

Though the opposition enjoys a clear majority in the Senate to win both the seats, political pundits say it is going to be a close contest and any deviation from party policy and wastage of votes in secret ballot can translate into an upset.

Back in August 2019, Senate Chairman Sanjrani had survived no-confidence vote when only 50 votes were cast in favour of the opposition’s motion against the 53 needed in the 104-member House for the move to succeed. Forty five senators had voted against the motion and five votes were rejected. Interestingly, earlier when the resolution was moved for the no-confidence motion, 64 opposition members had supported it.

After the Senate elections on March 3, the House strength has been reduced to 100 senators and now it consists of 99 senators, as Ishaq Dar is in self-exile and has not taken oath as a senator.

Now, the senators of the ruling coalition include 27 members of the PTI, 12 of Balochistan Awami Party, three of MQM, three independents and one each of PML-Q and PML-F – which is part of the Grand Democratic Alliance (GDA).

The opposition senators include 21 of PPP, 17 of PML-N, excluding Ishaq Dar who has not taken oath of the office, five of JUI-F, two each of ANP, BNP-Mengal, PkMAP and National Party and one of Jamaat-i-Islami. The opposition collectively has 52 members in the House excluding Mr Dar, against 47 senators belonging to the ruling coalition. As the Jamaat-i-Islami has decided to abstain from voting, the difference between the vote bank of the government and the opposition has narrowed down to four.

Earlier, the special session got off to a noisy start as the opposition, led by PPP’s Raza Rabbani, claimed that “secret cameras” had been installed at the polling booth. “This is against Article 226 of the Constitution,” he said, as the house resounded with chants of “shame, shame”.