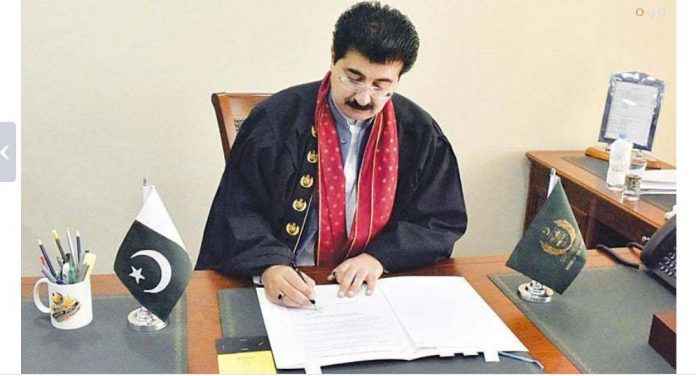 ISLAMABAD, MAR 12: PTI candidate Sadiq Sanjrani won another term as the Senate chairman on Friday in a blow to the joint opposition — despite the latter having a majority in the Upper House.

The opposition challenged the result of the election after it was announced that seven votes cast in favour of opposition candidate Yousuf Raza Gilani were rejected.

However, presiding officer Syed Muzaffar Hussain Shah overruled their objection, saying the seven votes were rejected because they were not stamped correctly. Another vote was rejected because it had been cast in favour of both the candidates.

Sanjrani received 48 votes, while Gilani obtained 42 votes. A total of 98 senators voted in the election.

Polling began after 3pm, and an officer called out names of senators in alphabetical order who collected ballot papers from officials and cast their votes at the polling booth.

JUI-F’s Maulana Abdul Ghafoor Haideri was the first senator to be called to make his choice.

Shah, who cast the last vote, announced around 4:40 that all 98 senators present in the house had cast their votes after which the counting began at 5pm.

The government had alre­a­dy announced that outgoing Senate Chairman Muha­mmad Sadiq Sanjrani will be its candidate for the office for another term. On Thursday, Prime Minister Imran Khan nominated Senator Mirza Moha­m­mad Afridi — a billionaire from erstwhile Fata — for the post of the deputy chairman.

Shah, who earlier administered the oath to all 48 newly elected members of the Upper House, read out the names of the candidates contesting for the positions as well as the senators sponsoring them.

He also directed that a body be formed comprising equal number of senators from the government and the opposition to investigate the matter of “hidden” cameras found earlier in the session.

“Recovered items like cameras and otherwise, will be secured and sealed till the final disposal of the matter,” he said.

The presiding officer further said a new polling booth had been established and asked representatives from both sides to inspect them.