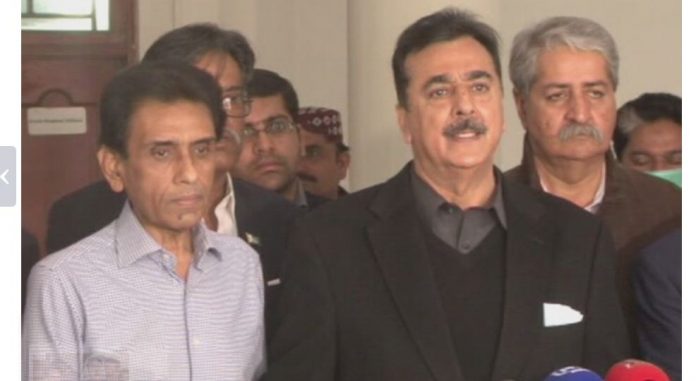 ISLAMABAD – The Muttahida Qaumi Movement-Pakistan leadership on Saturday held a meeting with the PPP on the upcoming Senate chairman election, with Khalid Maqbool Siddiqui saying his party’s doors were “open for all political forces”.

Siddiqui addressed a press conference in Islamabad alongside PPP’s Yousuf Raza Gilani, who became a senator in the March 3 elections on a joint opposition ticket, hours after he (Siddiqui) and other MQM MNAs cast their votes in favour of Prime Minister Imran Khan in a vote of confidence in the National Assembly. The premier won the trust vote with 178 ballots — six more than required.

Siddiqui said the MQM’s doors were open for all political forces and ideologies, adding that “dialogue between us is very important for Pakistan’s politics and democracy”. He revealed that the MQM itself had invited Gilani since he was a possible candidate for the Senate chairman election.

He thanked the PPP delegation for coming and said the MQM had also called a meeting of its Coordination Committee to discuss various issues such as the Senate chairman election after which it would reach “a final decision”.

Gilani said the PPP had already met the MQM at a provincial level, following which he and the PPP chairman were given the go-ahead to meet them. He said he was thankful to the MQM for its support during his tenure as prime minister when the PPP needed support for constitutional amendments, and that they had “done a lot of work together”.

“Today too, for democracy, rule of law, supremacy of parliament and stability in this country, I have requested them for support. On behalf of the PDM (Pakistan Democratic Movement), I would request them to support us,” said Gilani, who was accompanied by other senior PPP leaders.

He said the PDM would make any and all decisions including an endorsement for the Senate deputy chairman in an upcoming meeting of the opposition alliance’s leadership. He said he would put forward the wish of the MQM for the position in the PDM meeting.

While speaking in the NA earlier, Siddiqui had congratulated Prime Minister Imran on his successful vote of confidence but asked him to fulfil the promises made to his party and the country. “Your allies at this time and every difficult time will be seen standing beside you,” he told the premier.

“There was a purpose for making Pakistan, we want that purpose to be fulfilled through your hands,” Siddiqui said. He called upon the prime minister to initiate the process to turn Pakistan into a real democracy and a “welfare state from a security state”.