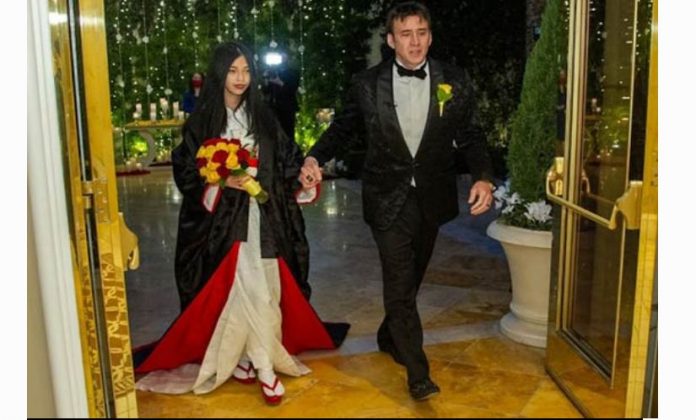 Hollywood celebrity Nicolas Cage got married on February 16 for the fifth time in a small ceremony in Las Vegas, less than two years after his last marriage with Erika Kookie. The actor married girlfriend Riko Shibata in a ‘very small and intimate wedding’ in Vegas.

The actor’s representative said: ‘After the wedding, the happy couple was joined for a small celebration attended by Nicolas’ ex-wife, Alice and their son Kal.’

Cage met Riko, who is from Kyoto, in Shiga, Japan, over a year ago, shortly after the dissolution of his fourth marriage.

This is the first marriage for Riko who, at 26, is four years younger than Cage’s eldest son Weston, 30, who he shares with ex Christina Fulton.

Cage has been married four times previously; he was first married to Patricia Arquette from 1995 until 2001, before marrying Lisa Marie Presley in 2002 and divorcing two years later.

In March 2019, the star married Erika Koike, but filed for annulment four days later, claiming in court documents that he ‘lacked understanding of his actions in marrying [Koike] to the extent that he was incapable of agreeing to the marriage’.