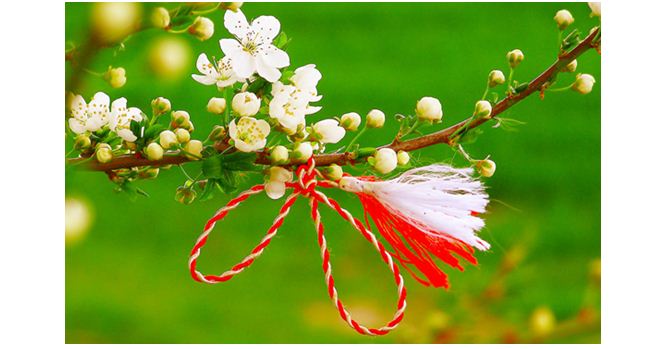 The tradition of Marțișor on 1st of March symbolizes the rebirth of the nature and marks the beginning of spring and changing of seasons in Romania, being the first in line of a series of celebrations in the month of March.

Mărțișor is an old tradition celebrated all over Romaniaand archaeological discoveries (small stones painted in red and white) suggest that the Mărțișor traces its history more than 8,000 years back. Some ethnologists believe that the Mărțișor celebration has Roman origins while others support the theory that it is an old Dacian tradition.In ancient Rome, the New Year’s was celebrated on the 1st of March.March (‘Martius’) was named in the honor of the god Mars. Mars was not only the god of war but also the god of agriculture, which contributes to the rebirth of vegetation.TheDacians also celebrated the New Year’s on the first day of March. Ample spring celebrations were consecrated to this event.

In the old times, Mărțișor were made of small river pebbles, colored in white and red, stringed on a thread and worn around the neck. They were worn, to bring good luck and good weather, from March 1 until the first trees would bloom. When the first trees were flowering the Mărțișor were hanged on tree branches.

Nowadays, on March 1, Romanians buy silky red-white threads (șnur) tied into a bow to which a small trinket is attached and offer them to their (female) family members, friends and colleagues to show friendship, respect or admiration.

All these small items are considered talismans and special in their own way, some Martisoare have a specific significance.Although this specific is up to anyone’s imagination, here you have a few examples: a four-leaf clover is a symbol of good luck – the four leaves represent hope, faith, love and luck, the horseshoe Marțisor is also among the most popular in Romania, as it is also said to bring good luck and good fortune,

The tradition of Marțișoris spread not only in Romania, but also in the neighboring countries like Moldova, Bulgaria, North Macedonia, Serbia etc.,and has been included since 7th of December 2017 in the UNESCO’s list of “intangible heritage of humanity”.

Starting with 1st of March, and all the way to March 8th, Marțișoare are offered to dear and beloved ones – small symbolic items tied with a red and white entwined cord,white for purity, red for life, as a sign of friendship, respect and affection.