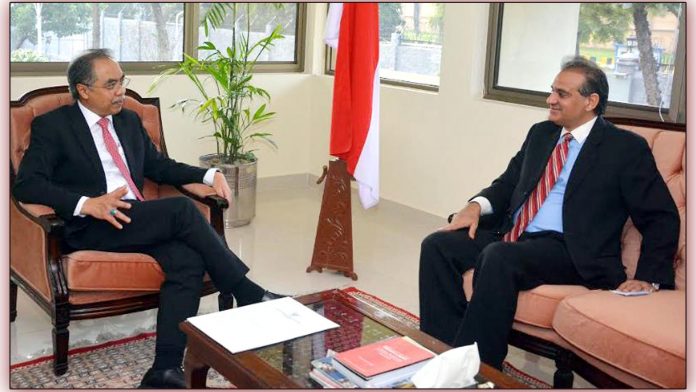 Indonesia highly values Pakistan’s ‘Vision East Asia’ policy. The implementation of this policy, we believe will contribute to further strengthen political, economic and cultural ties with ASEAN and its member states

ISLAMABAD: Ambassador of Indonesia Adam Tugio has said ASEAN is a dynamic organization of 10 members, spanning an area of 4.4 million square kilometers, a population of over 649 million, and a GDP exceeding US$2.9 trillion or the fifth largest economy in the world.

ASEAN and Pakistan have great potential for cooperation in various sectors. Pakistan’s total bilateral trade with ASEAN is over $7 billion while the trade between Indonesia-Pakistan reached up to $ 2.3 billion in 2020.  It suggests that there is huge scope for Pakistan to scale up its economic engagement with ASEAN through its member-states.

He expressed these views in an exclusive interview with Daily Islamabad POST.

Ambassador Tugio further said, Indonesia along with other ASEAN members continues to support close friendly ties with Pakistan as a Sectoral Dialogue Partner and an active member of the ASEAN Regional Forum (ARF). Indonesia supports Pakistan when it was accorded the sectoral dialogue status of ASEAN at the 26th ASEAN Ministerial Meeting on 23 July 1993. Indonesia also supports Pakistan to be full dialogue partner of ASEAN. Due to moratorium the process of Full Dialogue Partner is still pending.

Despite this, Indonesia encourages Pakistan’s collaboration with ASEAN region particularly in the areas of trade & investment, education, human resources development and tourism which could bring huge economic benefits to Pakistan.

He added, ASEAN and Pakistan have many similarities including strong cultural and religious affinity. There are approximately 242 million Muslims which are about 42% of the entire population, with majorities in Brunei, Indonesia and Malaysia as well Southern Thailand and parts of Mindanao in the Philippines respectively.

Talking about Pakistan’s Vision East Policy, the ambassador said, Indonesia highly values Pakistan’s ‘Vision East Asia’ policy. The implementation of this policy, we believe will contribute to further strengthen political, economic and cultural ties with ASEAN and its member states. To this end, Pakistan’s outreach to ASEAN needs to be deepened at political level among other through exchange of high-level visits and those of business community to make their presence felt.

He said, bilateral relations between the two countries are already quite excellent nowadays. So far there has been a mechanism at the technical level, bilateral consultation forums and policy dialogue, defense cooperation dialogue and Preferential Trade Agreement (PTA).  As an effort to strengthen bilateral relations we need to encourage a more structured dialogue at ministerial level to provide future directive to attain mutually beneficial objectives.

In addition, high intensity of interaction between high-ranking officials and parliamentary cooperation are necessary to further develop ties. Of equal importance is cementing of cultural bridge through two-way technical and socio-cultural cooperation, which will certainly encourage people to people contact among others. Particular reference should be made to the participation of millennial, whom we invest our efforts to build more prosperous Indonesia and Pakistan.