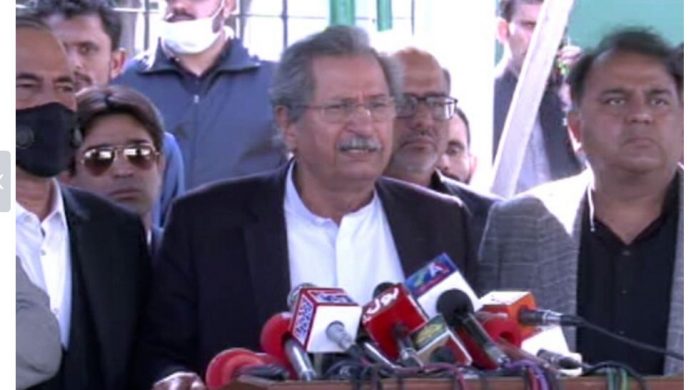 ISLAMABAD, MAR 1 – Members of the government and the opposition both claimed victory over the Supreme Court’s (SC) opinion on the issue of the secret ballot in the upcoming Senate elections, which was announced early on Monday morning.

In its short written order issued some hours after the announcement, the Supreme Court bench noted that Senate elections are held in accordance with the law and the Constitution. However, the apex court suggested that the Election Commission of Pakistan (ECP) could use the latest technology to hold transparent elections. The bench also said that the secrecy of the ballot papers was “not final”, quoting a decision by the top court on a similar matter in 1967 (Niaz Ahmed case).

The 4-1 majority opinion was announced by a five-member larger bench of the Supreme Court, headed by Chief Justice of Pakistan Gulzar Ahmed and including Justice Mushir Alam, Justice Umar Ata Bandial, Justice Ijazul Ahsan and Justice Yahya Afridi, with the latter choosing to abstain from responding to the question posed by the president’s reference.

The education minister said the SC’s decision “has shown a path” to how bad practices in the Senate elections could be prevented. He said it was “clearly written” that it was the duty of the ECP to conduct an election which was free of corrupt practices.

Awan, meanwhile, said that the SC referred to a previous decision of the top court in 1967 which allowed for “secrecy to be lifted considering the present circumstances, this is clearly written”. “This is a decisive moment in Pakistan’s history for elections to be conducted fairly”.

Chaudhry also said that the SC’s advice was “clear” that voters and their votes should be identifiable. “This is the principle on which the prime minister and the cabinet sent this reference to the SC,” said the federal minister.

“What is the SC’s decision? They have said that the secrecy of the ballot will remain secret for political parties but it won’t be secret for the ECP. So if there are allegations of horse trading or selling votes, then the ECP can conduct an inquiry,” said Chaudhry.

The technology minister said in a post on Twitter that the SC had “acknowledged the stance” to end horse-trading and corrupt practices in the Senate polls, adding it “has not adhered to the principle of full secret ballot”.

Minister for Information Shibli Faraz also took to Twitter and hailed the decision as “historic”. He said it was a “big day” for businessmen and traders of “[people’s] consciences” since the people who set up markets for buying and selling of votes will be disappointed.

“This is a success of Imran Khan’s vision of transparent elections,” said the information minister, adding that technology would be used in light of the SC decision to make “transparency real and make the identification of votes possible”.

Addressing the media outside the SC premises earlier, Senator Javed had also termed the opinion a “splendid decision” and a “victory for Pakistan”. “The honourable court said secrecy is not absolute. That means it cannot stay [this way] till the Day of Judgement,” said the senator.

‘Constitution far above the tricks of vote thieves’

Meanwhile, PML-N vice president Maryam Nawaz took to Twitter, saying the SC’s opinion once again proved that “the Constitution is far above the tricks of vote thieves, malicious references and conspiratorial ordinances”.

She said that now “alarms of technology are being raised” but warned that “RTS and Daska-fog technologies” wouldn’t work anymore.

“Why are you afraid of the power of the vote?”