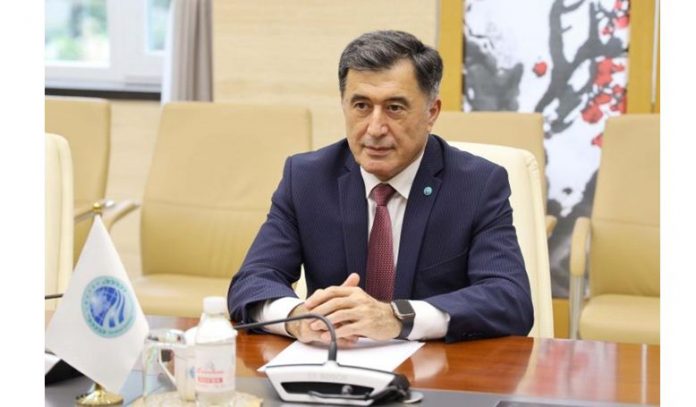 BEIJING (DNA) International conference was held in Tashkent on the role of youth in countering radicalism, extremism, and terrorism. The event was organized by the Uzbekistan Youth Agency, the Ministry of The Interior of the Republic of Uzbekistan, the Youth Union of Uzbekistan, the German Society for International Cooperation (GIJ), the OSCE Project Coordinator, UNDP in Uzbekistan and the UNODC Regional Office in Central Asia.

Speaking at the opening of the event, the SCO Secretary-General Vladimir Norov noted that the economic and social problems caused by the pandemic, associated with the decline in the level of education, the sharp increase in unemployment, and poverty have the most negative impact on young people who have difficulties with self-fulfillment and fear of the future.

According to him, in this situation young people are targeted by various terrorist organizations and extremist movements, seeking to lure them into their destructive activities through manipulation of the fragile consciousness of young men and women. At the same time, the advocacy and recruitment work of such structures is via aggressive cross-border network using modern information technologies.

Referring to the data of the SCO-RATS, V. Norov noted that in the last year alone, access to more than 23,000 Internet resources containing terrorist and extremist materials, including 326 social media accounts, was restricted in member states.

In this context, it is noted that following the SCO Moscow Summit last November, member states reaffirmed their commitment to developing multilateral cooperation to counter the use of ICT for terrorist, separatist, extremist, and other criminal purposes. The SCO leaders also recognized the need to develop universal legally binding tools under the auspices of the UN to ensure comprehensive international information security as well as counter information crime.

The Secretary-General recalled that at the SCO Summit in 2018in Qingdao, at the initiative of President Shavkat Mirziyoyev, the joint address of the SCO Heads of State to young people and the Programme of Action, aimed at implementing concrete joint measures to prevent the involvement of the younger generation in the activities of terrorist and radical structures, as well as establishing close cooperation between youth organizations to jointly combat various manifestations of international terrorism, separatism and extremism,were adopted.

During the Moscow Summit of the SCO, the parties particularly reaffirmed their readiness to continue the consistent implementation of these mainly significant documents, which gave a powerful impetus to the further development of youth policy, have brought to life many useful and important youth initiatives aimed at forming the younger generation’s ability to resist various destructive forces trying to introduce into the consciousness of young people ideas, bigotry, and violence.

In this context, it was emphasized that in the information age, digital literacy and a healthy digital culture are one of the drivers of the creative social and business activities of the younger generation, which ensures its creative self-realization, as well as the narrowing of the digital gap for economic growth.

Referring to the widespread introduction of digital technologies,V. Norov noted thatas by 2030 the world will have about 30% of “smart” jobs, and the growth of the world economy is forecasted to be approximately 13.4 trillionEuro, therefore; hundreds of millions of people, and above all, young people will have to urgently learn new skills or even change their profession.

It wasstated that in this regard, the expansion of the use of digital technologies in education and training is becoming more urgent for the SCO countries to prepare the younger generation for a changing economy and post-industrial society.

In this context, the relevance of the initiative of the President of the Republic of Uzbekistan to develop cooperation programs to develop digital literacy and to fight poverty in the SCO space, expressed by him at last year’s summit of the Organization, was underlined.

Undoubtedly, the joint development and implementation of the cooperation programs proposed by the Head of Uzbekistan will contribute to a significant increase in employment and reduce poverty among young people in the SCO space.

According to Norov, poverty is one of the main factors in the radicalization of young people and their involvement in extremist and terrorist activities.

In terms of implementing a comprehensive public policy on the development of human capital and strengthening the social activity of young people, S.M. Mirziyoyev’s recent speech at the Forum of Youth of Uzbekistan, as well as his proposal to declare 2021 the Year of Youth Support and Public Health in the country is truly relevant.

At the same time, the SCO Secretary General noted that this initiative of the leadership of the republic is particularly in line with the decision to hold this year as “Year of Culture of the SCO”, which will once again remind about the rich and unique historical, cultural and civilizational heritage of the peoples of our countries and the importance of educating and educating the younger generation in the spirit of patriotism, high morality, tolerance, humanism, mutual respect and the ability to conduct inter-civilization dialogue.

The Secretary-General further added that young people with their energy, innovative and bold ideas are an important support for the future development of the SCO in various aspects of its activities, including education, self-expression, creativity, and the realization of work for young people.

It was said that in 2020, with the support of the SCO Secretariat and with the participation of the SCO Youth Council, the International Technology Transfer Conference, the 2ndYouth Innovation and Entrepreneurship Competition, the SCO Young Scientists’ Conclave, the YOUTH Conference “AGORA: SCOLAR Vision” were successfully held, including the opening of the SCO Chinese Technology Transfer Centre in Qingdao as a platform for the implementation of the SCO International Youth Business Incubator initiative.

China’s initiatives to form the SCO International Youth Business Incubator, as well as India, to organize an annual Youth Startup Forum and create a special working group to develop start-ups in the SCO space alsohave been noted.

According to the Secretary-General, considering the upcoming 20th anniversary of the SCO this year, with the assistance of the Tajik Presidency, a number of measures have been planned to ensure the active participation of the younger generation in the political, economic and cultural life of the countries of our region, including the holding of an international conference in the coming August on strengthening multilateral cooperation to counter the involvement of young people in destructive groups.