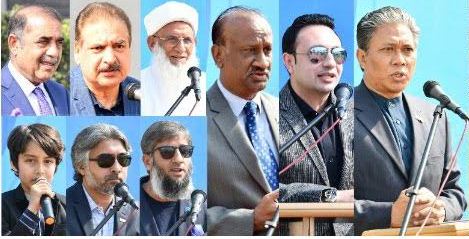 ISLAMABAD, FEB 24 (DNA) – Ikram Bin Muhammad Ibrahim, High Commissioner of Malaysia in Pakistan said that his country wanted to have greater bilateral trade with Pakistan as both countries have good potential to do trade in many items. He said that the food processing products of Pakistan have good scope to penetrate in Malaysian market.

He said that the lack of better connectivity between the private sectors of Malaysia and Pakistan was a hurdle in promoting bilateral trade up to the real potential of both countries that needed to be addressed. He said that Pakistani manufacturers should focus on products that have greater demand in the global market to improve exports.

He said that private sectors of both countries should take full advantage of the Pak-Malaysia FTA to improve two-way trade volume. He expressed these views while speaking as Chief Guest at a reception organized by Mian Arif Hussain, former Executive Member, Islamabad Chamber of Commerce & Industry at Kahuta Industrial Triangle. Sardar Yasir Ilyas Khan President ICCI, Mian Akram Farid Chairman Founder Group and a large number of business communities of twin cities were present at the occasion.

Speaking at the occasion, Sardar Yasir Ilyas Khan, President, Islamabad Chamber of Commerce & Industry said that Pak-Malaysia bilateral trade was not reflective of the real potential of both countries and both should facilitate private sectors in promoting two-way trade.

Sardar Yasir Ilyas Khan said that a large number of industries including some prominent pharmaceutical companies were operating in the Kahuta Industrial Triangle, but this industrial estate was totally ignored for development due to which it was plagued with many problems including broken roads, faulty street lights, non-functional water and sewerage systems.

He urged that CDA should start development works in Kahuta Industrial Triangle on priority basis to facilitate the growth of industrial activities and exports promotion.

However, he urged that the government should focus on addressing the key issues of the industrial sector on an urgent basis and develop all existing industrial estates on modern lines that would give a boost to industrial activities and improve exports.

Mian Arif Hussain and others also spoke at the occasion and stressed upon the CDA to focus on carpeting of roads, restoration of street lights, supply of water and improve sewerage and drainage system in the Kahuta Industrial Triangle so that this industrial estate could play more effective role in industrialization and exports promotion.=DNA