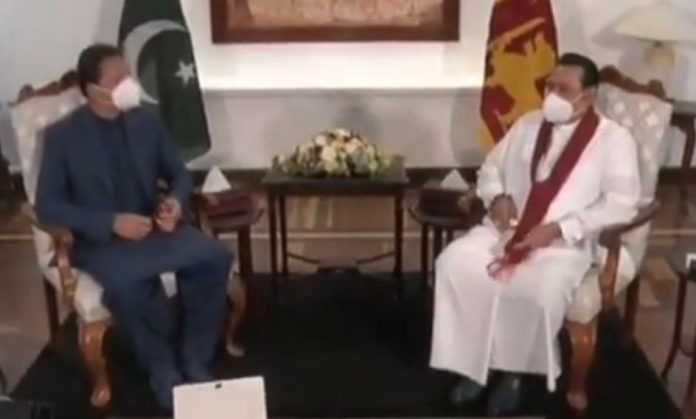 COLOMBO, FEB 23 – Prime Minister Imran Khan held a one-on-one meeting with his Sri Lankan Counterpart Mahinda Rajapaksa at Temple Trees in Colombo on Tuesday, and exchanged views on a wide range of issues with particular emphasis on further strengthening the bilateral relations in diverse fields.

The one-on-one meeting was followed by delegation-level talks.

The talks covered all areas of Pakistan-Sri Lanka bilateral cooperation including trade and investment, health and education, agriculture and science & technology, defence and security, and culture, and tourism.

Earlier, Prime Minister Imran Khan reached Colombo where he was received by his Sri Lankan Counterpart Mahinda Rajapaksa along with his Cabinet Members at the Bandaranaike International Airport.

Accompanied by a high-level delegation including Members of the Cabinet and Senior Government Officials, Imran Khan was accorded a red-carpet reception upon arrival followed by a formal welcoming ceremony where he was given a 19-gun salute.

The prime minister also inspected an impressive guard-of-honor following which the national anthems of both Countries were played. He also signed the Visitors’ Book.

During the visit, a number of Memorandum of Understandings (MoUs) will be signed to enhance the bilateral cooperation.

The prime minister will also participate in the Pakistan-Sri Lanka Trade and Investment Conference to be held on February 24 to promote trade and investment between the two Countries.