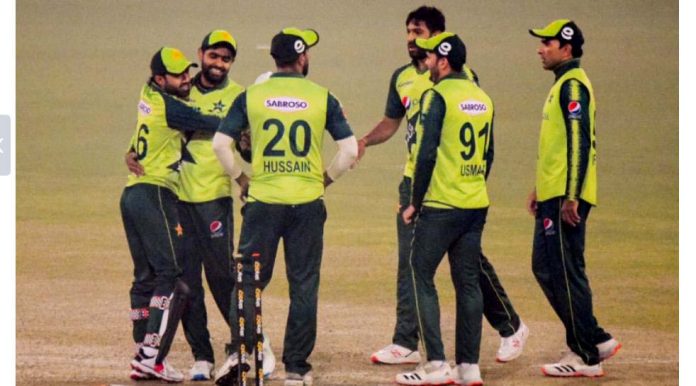 LAHORE, FEB 13: After recording a thrilling three-run victory against South Africa in the first Twenty20 International at the Gaddafi Stadium on Thursday, Pakistan seek to claim the series in the second game at the same venue on Saturday.

Though Pakistan were termed favourites to clinch the series opener under lights, a largely inexperienced but pumped up South African line-up fully stretched the hosts who in the end only managed to sneak home by three runs while defending a total of 169 as paceman Faheem Ashraf conceded 15 runs off a costly final over.

Batting display by all Pakistan players, except for gritty Mohammad Rizwan, remained below par in the first T20. Captain Babar Azam (0), Haider Ali (21), Hussain Talat (15), Khushdil Shah (12), Iftikhar Ahmed (4) and Faheem (4) all failed with the bat. And had Rizwan, who opened with Babar after Heinrich Klaasen opted to bowl first, not scored a gallant century (104 not out off 64 balls), the end result could have been opposite.

Though the home team’s spin duo of Usman Qadir (2-21 off four overs) and Mohammad Nawaz (0-21 off four overs) impressed on Thursday, all their pace bowlers were found wanting which almost cost them the match. Babar and company will need to look into this and make sure that fast bowlers make worthy contributions and support their spinners.

For South Africa, the situation does not seem encouraging as far as their batting is concerned. Apart from openers Janneman Malan (44) and Reeza Hendricks (54) who gave their team a brisk 53-run start inside the first six overs, all the other players including Klaasen fared poorly with the willow, particularly finding spin difficult to handle.

Klaasen’s approach of employing as many as seven bowlers also proved futile.

While the hosts are likely to retain the winning combination, South Africa may make a couple of changes to cover their bases for today’s game which is do-or-die for them.

Fog and dew factor has emerged during the last couple of days, posing a significant threat to completing the match. Heavy fog was witnessed during Thursday’s T20 and the situation was almost the same on Friday morning as well as evening.

However, encouraging is the fact that the met office has not forecast any rain till Sunday.