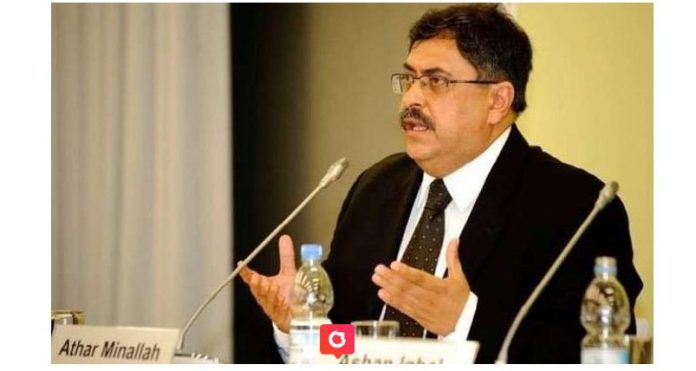 ISLAMABAD, FEB 12: Islamabad High Court (IHC) Chief Justice Athar Minallah reprimanded the police on Friday for not taking action against the lawyers involved in the high court’s February 8 rampage, saying he wants the real culprits to be named.

The recent ransacking of the chamber of Islamabad High Court (IHC) Chief Justice Athar Minallah by the lawyers protesting for the demolishing of their illegal chambers in F8 Markaz Lower Courts was engineered by the lawyers belonging to the opposition parties mainly PML-N.

“Former Chief Justice Iftikhar Chaudhary is also active in organising lawyers who not only were involved in this incident of IHC where Chief Justice Athar Minallah was attacked, but will also become a street power for the opposition parties forthcoming long march pitched to start from Karachi on March 26th”.

Prominent and senior lawyers who were not happy on this action of the lawyers said the entire lawyers’ community could not be blamed for the unfortunate incident. “Everyone has the right to protest but what the lawyers did inside the IHC is not at all acceptable,” said a senior lawyer.

Acknowledging the presence of black sheep in their profession, they said the whole incident at the IHC smacks of a foul play. They said a group of lawyers belonging to the opposition parties especially the PML (N) apparently used the pretext of demolition of their chambers to achieve their ulterior motives.

They said the opposition parties are using different dirty tactics and have unleashed their stooges in different strata of the society including the lawyers to pressurize the government. “Apparently the storming of the IHC building was aimed at destabilizing the government”, they said but regretted that the incident also brought a bad name to the country. They noted such incidents also dent the image of the country at the international level.

Hailing the government for prudently handling the situation, they were of the view that the lawyers’ community may have their political affiliations but should not become part of any conspiracy. They said those engaged in evil plots are bringing bad name to the community and their licenses need to be revoked. They also demanded strict action against those who ransacked the IHC building.

Police have registered a number of FIRs against the lawyers involved in the violence. Twenty one lawyers have been booked and according to a hand out of Islamabad High Court, separate contempt of court proceedings will be initiated against those found guilty of the offence.

It is pertinent to mention here that ever since the culmination of Pakistan Lawyers Movement to the restoration of former Chief Justice of Pakistan Iftikhar Chaudhary, the hooliganism of emboldened lawyers is on the rise. The practitioners of law now consider themselves above the law. Once hailed as the heroes are now seen as gangsters because of their never ending episodes of violent and irresponsible conduct. Drunk on power, these lawyers are not even afraid to curse the judicial officers.=DNA