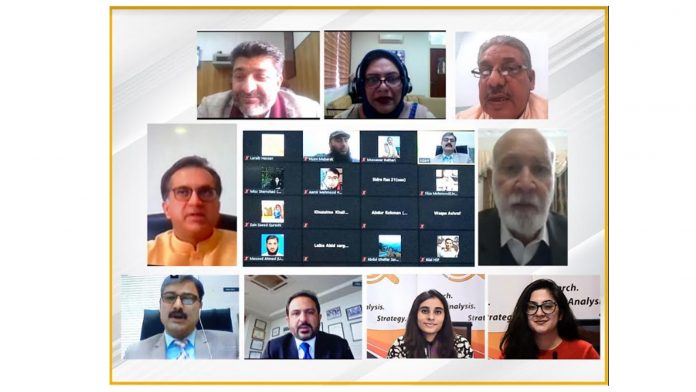 The conference commenced with the opening remarks ofMs. Palwasha Nawaz, Project Executive, Center for Global & Strategic Studies, Islamabad. She highlighted the importance of the conference and explained that it is of utmost importance tounderstand the transforming dynamics of international as a strategic discourse in the post-Covid-19 era. Moreover, she stated that the conference aims to analyze the policy perspectives of the incumbent US administration.

Mr. Muhammad Mudassir Tipu, Director General (China), Ministry of Foreign Affairs, Pakistan comprehensively discussed the role of China in addressing the key regional issues. He explained the role of China in regional connectivity. He highlighted that in a short period of six to seven years, we have completed excellent mega projects related to infrastructure, energy, agriculture, etc. Moreover, the second phase of CPEC will focus on agriculture, science, and technology, and socio-economic development, these are the projects that promise development in Pakistan.

He also stated that China’s financial and technological industry is enormous particularly when the global economy is in crisis due to COVID-19, which provides a lot of opportunitiesfor other states to collaborate.  He also explained that China has granted a lot of concessions through which Pakistan can export commodities to China. Moreover, he also highlighted the prospects of cooperation in the IT sector of both the states. He also suggested that over time, both nations should identify the sectors to enhance cooperation. He further highlighted the aspects of the development of the Gwadar port that has huge potential to connect many regions in the future.

Mr. Rahimullah Yousafzai, Senior Analyst & Journalist discussed the Afghan issue and the role of Pakistan. He also explained the regional policy framework vis-à-vis the current dynamics of the region. He highlighted the role of Pakistan in the Afghan peacemaking process and described the round of talks held between the US-Taliban and peace deal in detail. He also stated that both Taliban and Afghanistan were waiting for President Biden to decide the future policy discourse. The Taliban wanted the US to keep its promise of release of the Taliban prisoners. However, the release led to violence as they go back to their training camps. He also highlighted that the United States can ask for new deadlines but it is vital to ensure that the Taliban fulfilltheir commitment. He concluded that Pakistan is an important stakeholder in the Afghan peace process and the US also considers it as a core partner in negotiating with the Taliban. Mr. Rahimullah also said that the US can resolve its conflicts with Iran, hereby, it can play a significant role in the Afghan peace process.  Likewise, India can shed its traditional notion of reluctance and play a positive role in resolving Afghan Crises.

Prof. Dr. Shabir Ahmad Khan, Director of Area Study Centre, (Russia, China & Central Asia), University of Peshawar shared his thoughts on “Devising and implementing regional integration policies by Pakistan: Means and way forward”. He stated that China and Pakistan Economic Corridor (CPEC) is a game-changer, likewise, peace in Afghanistan will also prove to be a game-changer for Pakistan. He briefly explained the contours of CPEC and highlighted that this flagship project providesan opportunity for other regional states to integrate. He further stated that Pakistan is more inclined towards Central Asia for regional cooperation, as India’s reluctance provides a little opportunity for cooperation in South Asia. Moreover, Prof. Dr. Shabir stated that China is a friendly neighborand is assisting Pakistan to build a greater infrastructure. In this regard, regional countries should integrate to harness connectivity and regional collaborationvia CPEC projects.

Dr. Irum Khalid, Chairperson, Political Science Department, University of Punjab, Lahore briefly discussed the transforming US foreign policy approaches and analysis on Joe Biden’s Administration. She stated that Biden has made the targets clear in his first speech. He was more inclined towards revising the policies. In this regard, she also stated thatthere are certain constraints in new foreign policy options for the US regarding the regional political and economic discourse. The regional politics includes the Iran conflict, Yemen Crises, Middle East, Afghanistan, China, and South Asia. She concluded that in present times, the US cannot afford any other humanitarian crises. So, it should move slowly towards reconciling the damage. She also stated that the world is now more inclined towards a dialogue of civilization rather than theclash of civilizations.

Dr. Mussawar Hussain Bukhari, Chairman, Political Science Department, Islamia University of Bahawalpur (IUB) discussed the US foreign policy towards Asia, Objectives, and Implications. He described that mostly the policies of superpowers are based on three levels i.e., state, regional, and international. However, during the Trump regime, the policies were based on other three elements: military, economy,and soft image. He stated that the United States has lost its soft image at the international level in Trump’s tenure.He alsohighlighted the complexities of the region caused due to reluctant policies by India. Dr. Mussawar also explained briefly the important contoursof China’s connectivity through CPEC.Furthermore, he highlighted theregional policies and dynamics of Beijing and projectsof cooperation with other South Asian nations.

Dr. Adam Saud, Dean, Faculty of Humanities and Social Sciences, Bahria University, Islamabad explained the emerging realities in the international political system. The main focus was on the shift of foreign policies in recent times. He stated that soft power is the key to international stability. He briefly discussed the important transforming realities of today’s political system that have impacted the foreign policy and behavior of the countries. For example, digitalization, Artificial intelligence, fifth-generation warfare, ecological system, environment degradation, and Covid-19 pandemic.He concluded by suggesting that Pakistan should move prudently while keeping a view of its national interest. Moreover, he said that Pakistan should have good relations with other states as well to achieve stability in Afghanistan. He suggested that Pakistan has a key position in the region and international political system because of CPEC, which is a game-changer.

Mr. Jawad Majid, Director, Silk Bankdiscussed the role of socio-economic institutions and organizations for sustainable development in the post-Covid-19 era. He explained that in this crucial time of the pandemic, we have seen development and growth in different industries. This transformation also made the dynamics of the global environment shift. He explained that in the post-pandemic era, the economy of Pakistan has gradually improved specifically in the agriculture sector. Mr. Jawad also discussed that international organizations have assisted Pakistan in overcoming challenges caused due to COVID-19, he also highlighted the important role played by China. He also highlighted three dimensions that witnessed growth in an efficient manner including quality, positive economic construction in the women labor force, and improving the efficiency at the national level in the short and medium-term. He concluded that all institutions of Pakistan have played an efficient role in combating the pandemic. However, there should be more improvement in the policies to go along with the changing dynamics of regional and international affairs.

The conference was moderated by Ms. Laraib Fatima Hassan, Communication& Coordination Manager, Center for Global & Strategic Studies (CGSS), Islamabad, and was attended by 80 participants. It was also viewed live by 300 viewers on social media platforms.