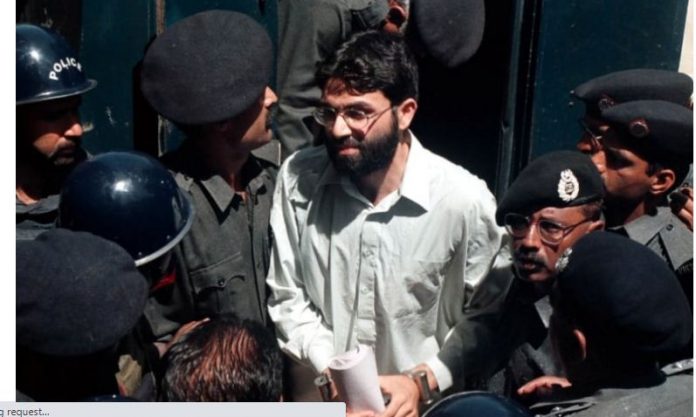 Ahmed Omar Sheikh, who was convicted of kidnapping and facilitating the murder of US journalist Daniel Pearl, has been moved to the Central Jail in Karachi.

Sheikh and four other suspects, Fahad Nasim Ahmed, Salman Saqib and Sheikh Muhammad Adil, named in the case were moved on Saturday night to a new building constructed in the prison.

Earlier this month, the Supreme Court instructed authorities to move him to a barrack from a death cell. They were told to find a suitable rest house for him, and shift him there on Kashmir Day (February 5).

Sheikh’s family will be able to meet him from 9am to 5pm and he will not have access to a mobile phone or internet service. The government has made arrangements for the stay of the suspects’ families at Qasr-e-Naz, the government’s rest house.

Sheikh’s family will meet him on February 8 [Monday], Sheikh Aslam, the brother of one of the suspects in the case, told SAMAA Digital.

On January 28, the Supreme Court ordered Sheikh’s release. The White House said it was “outraged” by this decision. Following this, the Sindh and federal governments filed a review petition against the verdict.

The men were kept in detention after their release orders were issued in April 2020. However, their lawyers challenged them. The court said that Sindh government was extending their detention “without lawful authority”.

Who was Daniel Pearl?

Pearl, 38, was the South Asia bureau chief for The Wall Street Journal when he was abducted in Karachi in January 2002 while researching links between militants in Pakistan and Richard C Reid, who is also known as the ‘shoe bomber’ for trying to detonate a shoe bomb while on a flight from Paris to Miami in 2001.

Pearl’s wife Mariane Pearl, a US national who was living in Karachi’s Zamzama, wrote a letter to the Artillery Maidan police on February 2, 2002, and said her husband disappeared on January 23, 2002. She said she received an email from the abductors saying that he has been abducted “in retaliation for the imprisonment of Pakistani men by the US government in Cuba and other complaints”.

A graphic video showing Pearl’s decapitation was delivered to the US consulate in Karachi nearly a month after he was kidnapped.

After this, a case was filed against the suspects and 23 witnesses were produced in the case by the prosecution. Sheikh was arrested by Pakistani security agencies in February 2002 and an anti-terrorism court convicted him and others on July 15, 2002.

An investigation, led by Pearl’s friend and former Wall Street Journal colleague Asra Nomani and a Georgetown University professor, claimed the reporter was murdered by Khalid Sheikh Mohammed, the alleged mastermind of the September 11, 2001 attacks, not Sheikh. Mohammed — better known as KSM — was arrested in Pakistan in 2003 and is being held at Guantanamo Bay.