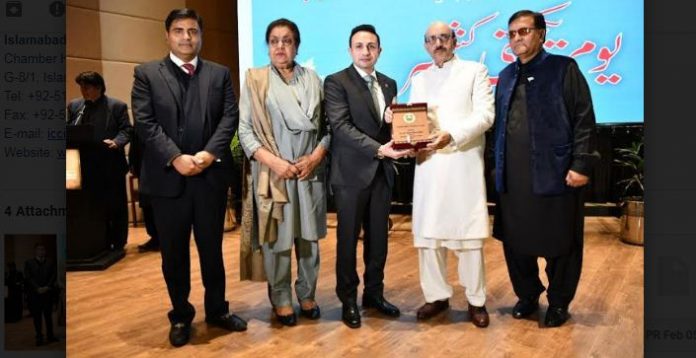 He said that the Pakistan has revived the Kashmir issue in UN and at other international forums, which showed that Pakistan would never let down the Kashmiri people. He said that defensibly and economically a strong Pakistan was important for resolving the Kashmir issue. He said that Pakistani business community should boycott every Indian product. He expressed these views while speaking as Chief Guest on the occasion of Kashmir Solidarity Day organized by the Islamabad Chamber of Commerce & Industry to express solidarity with their Kashmiri people.

Azam Khan Swati, Federal Minister for Railways said that the resolution of Kashmir issue was essential for the establishment of durable peace and stability in the region and bring progress and prosperity to South Asia. He said that the use of force against the unarmed Kashmiri people could neither crush their independence movement nor change the principled position of Pakistan on Kashmir.

Senator Gen. (Retd) Abdul Qayyum said that the nation was today observing the Kashmir Solidarity Day to reaffirm its unflinching support for the just struggle of our Kashmiri brothers and sisters who have been subjected to inhuman atrocities. He said that the unprecedented restrictions by India on Kashmiri people fully exposed its fiction of democracy and its scant regard for basic human rights.

Speaking at the occasion, Sardar Yasir Ilyas Khan, President, Islamabad Chamber of Commerce & Industry said that just settlement of Kashmir issue was vital to unleash the real economic potential of the region and uplift the living standard of people.

He said that India touched a new low in August 2019 when it revoked the Article 370 of Indian Constitution to withdraw the special status of Occupied Kashmir and now India was working for demographic changes in Kashmir to reduce the majority of Muslims there. However, he vowed that Pakistani leadership and nation would never let India to succeed in such moves.

He said that since August 2019, India has imposed curfew-like situations in Kashmir violating basic human rights of Kashmiris, which was highly condemnable. He expressed concerns that businesses in Occupied Kashmir were suffering huge losses due to curfews while people were facing shortage of medicines and food, which could lead to catastrophic results for them. He urged that the world community should play a role for implementation of UN resolutions on Kashmir so that the Kashmiri people could decide their future according to their wishes. He urged that Indian barbarism should be stopped in Kashmir and warned that the silence of the international community on the Kashmir issue could be a prelude to a major war in the region.

Zafar Bakhtawari, Convener, ICCI Kashmir Committee said that the forcible occupation of Kashmir by India was against the moral values of modern society and the basic rights of the people. He said that thousands of Kashmiris have sacrificed their lives so far and their blood would never go waste. He said that India would never succeed in its nefarious designs in Held Kashmir as the spirit of independence and freedom was now on the rise in the Kashmiri youth and they could not be held occupied for long.  He expressed hope that the sun of independence would soon rise in the occupied Kashmir and the people there would be able to live in a peaceful and free environment.

Mishal Hussain Malik, Chairperson Peace and Cultural Organization highlighted the detail of atrocities being committed by India on Kashmiri people and thanked ICCI for organizing Kashmir Solidarity Day to express solidarity with the people of Occupied Kashmir.

They said that Kashmir was a nuclear flash point and could start a nuclear war, therefore, its resolution was important to bring durable peace in the region. They said that an economically strong Pakistan would be in a better position to get this issue resolved.

They said that the business community and the people of Pakistan fully supported the cause of Kashmiri people for their independence. They reaffirmed that Pakistan would continue to provide moral, political and diplomatic support to the Kashmiri people till the time they got their freedom from India. Prof. Shazia Akbar, Poetess read a poem on “Kashmir ki Awaz”.=DNA