ISLAMABAD, SEPT 26 (DNA) -Members of transgender community exhibited their entrepreneurship skills during a two-day exhibition titled “hoping against hope”, held at a local hotel. The two day exhibition featured display of exotic pieces of art made by transgenders of twin-cities.

The visitors praised great art work done by this otherwise neglected and less-privileged segment of the society.

Sri Lankan High Commissioner Noordeen Shaheid said transgender community has amazing skills and their creativity is reflected in the items put on display. The high commissioner also went around various stalls and evinced interest in difference items crafted by the skilful transgenders.

While commending Mahnush’s initiative, former Prime Minister Yousuf Raza Gilani said transgender community was playing a wonderful role in various fields and professions and one must appreciate and highlight their role and their fight against social and cultural indiscrimination.

“They have more acceptances in society than before. National Database And Registration Authority (NADRA) is issuing them Computerized National Identity Cards (CNICs) and various companies and departments are hiring them on the basis of their qualification and pure merit”.

According to Mahnush’s young chairperson, Maha Chishti, Mahnush aims to promote through the exhibition ‘trans-equality awareness’ and to bring forward the talent of its transgender team members.

They (transgender vocational and skilled workers and artists) have worked very hard to produce home accessories, decorative items and other things, said Maha Chishti while referring to their things put on display.

Maha and her group of students earlier endeavoured some three years back to teach transgender community while she was an A-level student.

However, they did not make headway as they (transgender) were scared at that time and feared their ‘guru’ would be offended.

Training them in vocational skill, however, was a bit easier, said Maha Chishti.
Mahnush took the initiative to inculcate vocational skills within them so they are able to earn in a more dignified manner and respectable environment, said she. 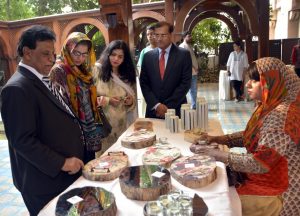 Transgenders Sapna and Chandni while interacting with the media said they were grateful to Mahnush and its team lead Maha Chishti for helping them out and for encouraging them to get vocational training and now they felt quite relieved of their fears of being dismissed by the society.

Some of their handmade things included trays, posters, lamps and other accessories. Aleesha and Ayesha Mughal two transgenders, working in the United Nations Development Programme (UNDP) and Ministry of Human Rights (MOHR) respectively said they had come to express solidarity with their transgender friends and to make them realize they could change and better their lives by adopting a different attitude towards life.