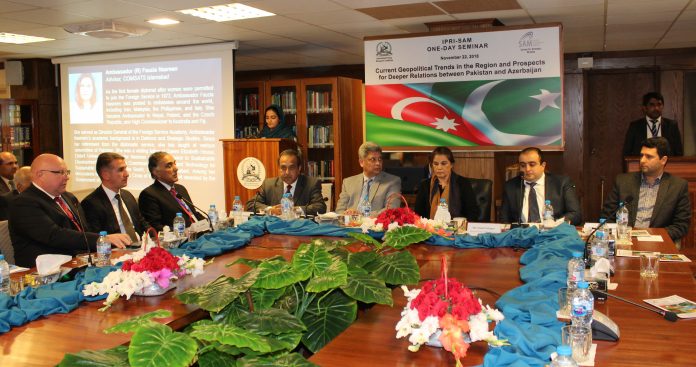 Both share common regional and global challenges and threats in the current geopolitical trends and need greater cooperation to maximize each other’s potential to overcome them.

Both countries need to increase people-to-people contacts through tourism and initiating direct flights.

Delegates from Azerbaijan and Pakistan stated this at the International Seminar on “Current Geopolitical Trends in the Region and Prospects for Deeper Relations between Pakistan and Azerbaijan”, organised by the Islamabad Policy Research Institute (IPRI), in collaboration with the Azerbaijan Center for Strategic Studies (StratejiAraşdırmalarMərkəziis-SAM) here in Islamabad on Thursday.

The further said, Pakistan-Azerbaijan trade was  miniscule compared to its potential and needed to be improved through greater interaction between their Chambers of Commerce and Industry.

“Terrorism and drug trafficking is a common challenge. Pakistan and Azerbaijan should develop joint mechanisms to deal with these mutual threats”, they added.

Speaking to a packed audience of diplomats, bureaucrats, students and journalists, the Ambassador of Azerbaijan Ali Alizada stressed that research exploration is an important part of Azerbaijan-Pakistan relations, which present numerous opportunities to both countries, especially for their think tanks to work together and increase knowledge about each other.

“Pakistan is a strategic, brotherly country and the government and people of Azerbaijan are always ready to improve and strengthen relations,” he said. Ambassador Alizadashared that there has been a 23% increase in trade between both countries, and visa procedures for Pakistanis had been eased to facilitate travel and tourism, and in the near future, direct flights between both countriesare also being planned. He also highlighted that energy projects and scholarship programmes for Pakistani students were also being implemented.

Delivering his keynote address, DrCavidVeliyev, Head of Foreign Policy Analysis Department, SAM Azerbaijan said that “Azerbaijan’s landlocked geography has had a deep impact on its economic and social development as well as identity.

Located between the East and West, North and South, Azerbaijan is fast becoming an important transport and trade hub.”He pointed out that Azerbaijan has a “multilateral, balanced, proactive and independent foreign policy.” This is why the country is member of the Non-Aligned Movement and not a part of any military forum.

“Given its balanced foreign policy, Azerbaijan’s trilateral relations with Pakistan, Turkey are equally important which are project-oriented; and also help to discuss and resolve regional problems through diplomacy and peaceful means,” he concluded.

In the working session which was chaired by Ambassador (R) FauziaNasreen, Advisor COMSATS Secretariat, MrFuadChiragov, Research Fellow, Azerbaijan Center for Strategic Studiesexpressed his gratitude to Pakistan for its support and solidarity when Azerbaijan faced Armenian aggression.

“Pakistan was one of the few countries that did not close eyes to the injustice, openly condemned the aggression and spoke about the true nature of events in Nogorno-Karabakhwithout any ambiguous statements and messages.”He pointed out that Azerbaijan is also aware of how international institutions and great and regional powers approach Pakistan in a double-standard manner.

“We see how Pakistan tries to survive in a very complicated geography. Azerbaijan has always supported the position of Pakistan in international affairs and UN Security Council resolutions regarding the Kashmir problem; and will always be committed to this position.”

MrChiragov highlighted that this region has inherited ongoing conflicts from the 20th century that have already exhausted regional and nationalpotential.

He warned that global transformative changes are not only shaking socioeconomic and political grounds of the developing world, but also of Western societies.

“Some representatives of leading states, who once claimed to represent the voice of humanity, now don’t shy away from framing their discourse within a nationalist and egotistical narrative.

We are even witnessing some great powers announcing policies that lead to ‘trade wars,’ which could in turn lead to unintended and unpredictable economic and political consequences that result in the suffering of billions of innocent people in different parts of the world.

Great powers increasingly tend to view world affairs with much more of a win-lose principle than a win-win one.”He concluded that countries in this region that are culturally and historically bound and have common values and background should seek more cooperation, peace and sustainable development-oriented policies.

“The sincere relations, similar vision to international issues and very positive synergy between Azerbaijan and Pakistan are the very foundation for cooperation, peace, stability, and security from which not only people of our countries, but also all people in the region might benefit.”

Dr Nazir Husain, Director, School of Politics and International Relations, Quaid-i-Azam University, Pakistan spoke about how with the rise of the China-Pakistan Economic Corridor (CPEC) and newly developing geopolitical realities, there is scope for much more interaction.

“With China emerging as a prominent stakeholder in economic and security fabric of Asia, there is a change of pace for geoeconomics. There is a growing need for security and strategic cooperation; as well as via energy and pipeline politics which is now more of a reality.”

He agreed that in the changing geopolitical milieu, Pakistan and Azerbaijan need to further strengthen their ties, especially in the defence and trade sector and forge more sustainable relations with each other.

MrMahirHumbatov,Research Fellow from SAM highlighted Azerbaijan’s development as a transit country and shared details about itsinfrastructure and logistics projects.

“Located at the crossroads of Europe and Asia, Azerbaijan is becoming an important transport and logistics centre of the region.”He discussed the important work that has been carried out in his country to improve the transport, railways, port, sea shipment and airways infrastructure, which plays a significant role in the development of the economy, in particular, the non-oil sector.

MrHumbatov also highlighted developments in the country’s IT sector which now has its own satellite, multilateral initiatives and special free IT zones.

Talking about prospects and challenges of connectivity between CPEC and the Economic Cooperation Organization (ECO),DrFazal-ur-Rahman,Director, Pakistan Institute of China Studies, University of Sargodha was of the view that both undoubtedly have huge potential for creating direct or multimodal transport connectivity, which could enhance regional economic integration in a globalised environment.

“Pakistan has always been supportive of connectivity-related initiatives for achieving regional cooperation, be it ECO or CPEC. Although China is not a member of the ECO, Chinese Vice Foreign Minister Zhang Yesui participated in the ECO summit in Islamabad in 2017 which emphasises the need of connectivity for regional prosperity and convergence with China’s BRI project, and its flagship CPEC.”

Dr Fazal warned, however, that lack of capacity and strong political will on part of ECO member countries was weakening this Organization.

“ECO has the potential of becoming a strong and viable economic blocif it connects with BRI and CPEC;member states strengthen its Secretariat; increase funding; re-negotiate the ECO trade agreement and turn it into a Free Trade Agreement; focus on multilateral agreements; and increase networking of the ECO Bank with other IFIs”, he recommended.

Earlier, IPRI’s Acting President Brig. (R) MehboobQadir in his welcome address saidPakistan and Azerbaijan believe that they are destined to play an important role in helping to establish peace, security and economic progress in South and West Asia.

The emerging geopolitical and economic realities in the region offer both challenges and opportunities. “The challenges stem from extremism, indefinite presence of the US forces in the region, expanding pockets of the ISIL in Afghanistan, the Indo-US strategic alliance, US attempt to counter Chinese and Russian influence in the region, and the hostile measures to engineer instability in Pakistan.

The opportunities emanate from trans-regional economic initiatives such as China’s Belt and Road Initiative and the Russia-led Eurasian community,” he remarked.