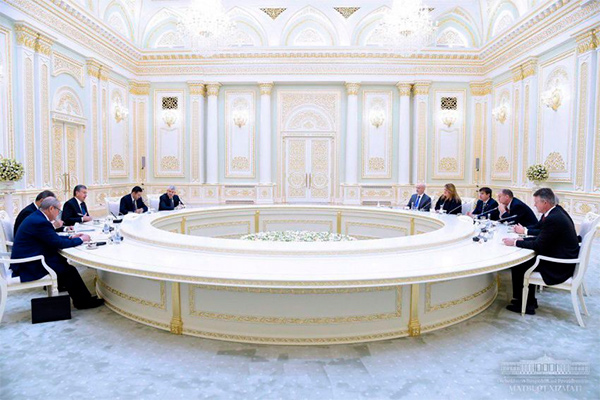 TASHKENT, (DNA) — President of the Republic of Uzbekistan Shavkat Mirziyoyev received a delegation of the US Congress led by Congressman Trent Kelly.Warmly welcoming guests, among whom were also members of the House of Representatives Vicente Gonzalez, Ronald Estes, Roger Marshall and Jennifer Gonzalez Colon, our head of state sincerely congratulated congressmen on the successful holding of mid-term parliamentary elections in the United States.

The dynamic development of Uzbek-American multi-faceted cooperation observed recently has been noted with deep satisfaction. It was emphasized that the summit, held in Washington in May of this year, marked the beginning of a new era of strategic partnership between our countries.

Contacts in various areas of interaction have been intensified, a constructive political dialogue has been established, inter-parliamentary exchanges, as well as cooperation in the cultural, humanitarian and educational fields are expanding.

In the trade and economic sphere, joint efforts are being made to focus on increasing the volume of mutual trade, attracting direct investments and technologies of leading US companies in the development and modernization of sectors of Uzbekistan’s economy.

Since the beginning of this year alone, the volume of bilateral trade has doubled, and more than 25 new enterprises have been created in the republic with the participation of American capital.

Last month, business events of the American Business Week were held for the first time in our country, with the participation of a representative delegation led by US Secretary of Commerce Wilbur Ross.

Uzbek President noted with satisfaction the creation in the US House of Representatives the “Caucus  on Uzbekistan” under the leadership of Congressmen Trent Kelly and Vicente Gonzalez. It was expressed confidence that this mechanism will become an effective factor in the deepening of comprehensive relations and the promotion of specific economic projects.

During the meeting, topical issues of bilateral relations, as well as regional and international agenda were discussed.

Special attention is paid to creation of favorable conditions and support of joint programs and projects of trade, economic and investment cooperation, primarily at the interregional level.

The congressmen, expressing sincere gratitude to the Uzbek President for the warm welcome, highly appreciated the reforms and transformations being carried out in Uzbekistan at the new stage, covering all spheres and directions.

They underlined the readiness to actively contribute to the further development and strengthening of strategic partnership relations and the expansion of mutually beneficial practical cooperation between two countries.