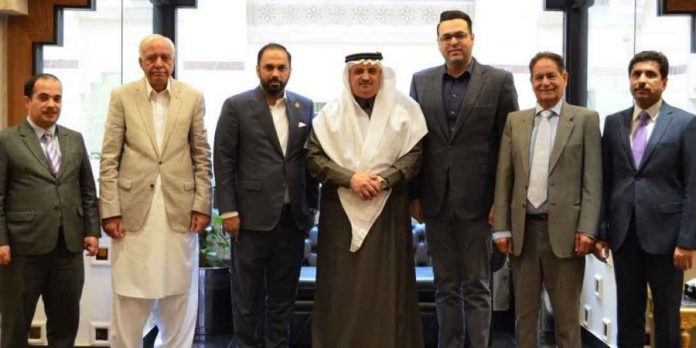 ISLAMABAD, (DNA) – Nawaf Saeed Al-Malkiy, Ambassador of Saudi Arabia said that Pakistan has great potential for business and economic growth that needed be highlighted more effectively to attract the attention of foreign investors.He said that Prime Minister Imran Khan was keen to promote Pakistan’s exports for which, apart from government-to-government contacts, enhanced people-to-people contacts were necessary so that foreign people could come to Pakistan and see its actual potential.

He said there was a great need promote soft image of Pakistan to outside world in order to get enhanced FDI. He said this while exchanging views with a delegation of Islamabad Chamber of Commerce and Industry that called on him led by its President Ahmed Hassan Moughal. Rafat Farid Senior Vice President, Iftikhar Anwar Sethi Vice President ICCI, Khalid Malik Chairman ICCI Diplomatic Committee and others were in the delegation.

The Envoy said that Saudi Arabia was now more opened to foreign investors and Pakistani investors should also explore JVs and investment in Saudi Arabia in areas of interest. He stressed that Pakistan and Saudi Arabia should focus on frequent exchange of trade delegations to explore all untapped areas of mutual cooperation. He said that Saudi Commercial Section would try to explore all possible areas of JVs and investment in Pakistan for Saudi investors. He urged that ICCI should form a delegation for Saudi Arabia and his Embassy would cooperate in making its visit successful.

Speaking at the occasion, Ahmed Hassan Moughal, President, Islamabad Chamber of Commerce and Industry said that ICCI intended to take a delegation to Saudi Arabia in December or January to explore new avenues of mutual cooperation between the two countries for which support of Saudi Embassy was needed to facilitate its visit. He said that investors of Saudi Arabia should explore JVs and investment in CPEC and other sectors of Pakistan’s economy.

Rafat Farid Senior Vice President and Iftikar Anwar Sethi Vice President ICCI said that Pakistan and Saudi Arabia have good potential to enhance cooperation in many areas and both countries should focus on developing strong business linkages between private sectors that would help in improving bilateral trade and economic relations between the two countries.