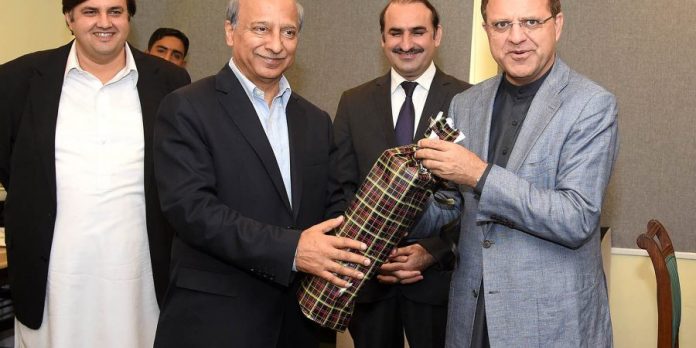 ISLAMABAD,  NOV 19 (DNA) – The outgoing Ambassador of Afghanistan Hazrat Omar Zakhilwal said on Monday that relations between Afghanistan and Pakistan are indispensable adding during his tenure he tried his best to strengthen bilateral  ties.

Afghanistan, Pakistan relationship cannot remain the way it is and no matter how many times we make attempts and those attempts fail, we need to continue till the time our attempts bear some fruit.

The Afghan ambassador expressed these views while speaking on the occasion of a farewell luncheon hosted for him by the Center for Research and Security Studies (CRSS).

The outgoing ambassador, who is retiring from the government service, further said Pakistan indeed was a challenging job however he accepted to be the Afghan ambassador in Islamabad just to play his role to bring both countries closer.

Ambassador Zakhilwal said his two and half years stint in Pakistan was not an easy job. It was ostensibly a tough call nevertheless he tried to deliver in the difficult circumstances.

“I came to Pakistan with very ambitious agenda – the agenda of taking forward the bilateral relations. We are certainly way far from where we would like to be, but during my tenure I had a chance to study this relationship rather deeply and now I can say I have a deep understanding of Afghanistan, Pakistan relations”.

He said during this period he at least thrice packed up his wherewithal to leave Pakistan and at one point in time he directly spoke with his President that he wanted to come back, but then he had a second thought and decided to brave the challenges and work for strengthening of bilateral relations.

The ambassador said the bilateral trade is dropping down adding he put in his best efforts to improve bilateral trade. He said when he came to Pakistan, Afghan refugees were facing a number of problems, but he was able to help significantly improve living conditions for refugees.

“I am returning to Kabul but for sure peace in Afghanistan and bilateral relations shall still be my top priority. Even though I will not be working with the government anymore, even then I will try my best to contribute to improvement of relations between the two countries”, he added.

Ambassador Omar said whenever relations between the two countries are put on the right track, something unexpected happens and then the whole process is derailed. He also referred to case of SP Tahir Dawar in this regard.

The ambassador thanked all his friends, especially those came to bid him farewell and invited them to Kabul to be his guests. He also thanked the CRSS for providing him with a chance to say goodbye to his friends.

Executive Director CRSS Imtiaz Gul recognized services of the outgoing Ambassador of Afghanistan wishing him best of luck in his future endeavors.=DNA