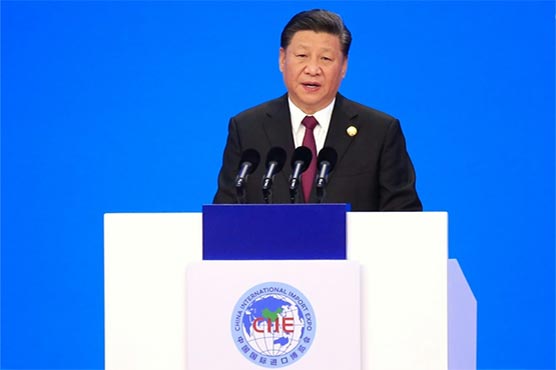 SHANGHAI (DNA) – President Xi Jinping on Monday pledged to widen access to China’s economy, while delivering a veiled rebuke to Trumpism, as he kicked off an import fair amid growing foreign accusations his government was backtracking on grand reform promises.

“It is our sincere commitment to open the Chinese market,” Xi said in an address opening the event in Shanghai.

He added that China would endeavour to “foster a world-class business environment” and that China’s doors will open “ever wider”.

But he also pushed back at foreign pressure in comments clearly aimed at Donald Trump, who has started a trade war between the world’s two largest economies.

“They should not just point fingers at others to gloss over their own problems,” Xi said, decrying “protectionism”, “isolationism” and confrontation.

“They should not hold a flashlight in hand, doing nothing but highlighting the weaknesses of others and not their own.”

Beijing frames the first annual China International Import Expo as a sign of its commitment to open markets despite mounting criticism to the contrary and the worsening trade war with Washington, which has seen both sides impose punitive tariffs on hundreds of billions of dollars worth of goods.

Organisers say more than 3,000 foreign companies from 130 countries including the United States and Europe will put their products on display for potential Chinese buyers at the expo, including General Motors, Ford, Microsoft, Samsung, Walmart and Tesla.