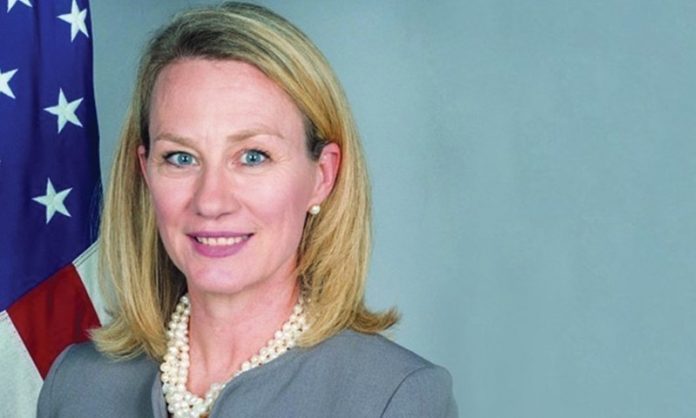 ISLAMABAD, (DNA) – The US Ambassador Alice Wells, the Principal Deputy Assistant Secretary of State for South and Central Asia, has arrived in Islamabad, on Tuesday.According to a statement issued by FO Spokesperson Dr Muhammad Faisal on Twitter, Ambassador Wells would hold meetings with the senior officials of the foreign ministry.

“US Principal Deputy Assistant Secretary of State for South and Central Asia, Ambassador Alice Wells will visit Pakistan on 6 November. She will hold meetings with senior officials at the Ministry of Foreign Affairs,” Dr Faisal said on Twitter.

The Foreign Office spokesperson termed the visit a followup of the meeting held between Minister of Foreign Affairs Shah Mahmood Qureshi and US Secretary of State Michael Pompeo — part of the latest US outreach to the government of Prime Minister Imran Khan.

“The aim would be to follow up on discussions between Foreign Minister Shah Mahmood Qureshi and US Secretary of State Michael Pompeo with a view to further strengthen bilateral relations. Ambassador Wells will also call on the finance minister,” Dr Faisal said.

Qureshi visited Washington in October on Pompeo’s invitation, who had earlier visited Islamabad in September to hold talks with the newly-elected PTI government.