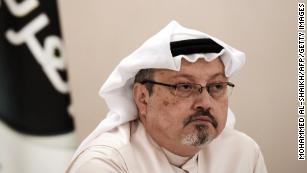 RIYADH, (DNA) – An official source in the Kingdom of Saudi Arabia’s Foreign Ministry stated that Royal Orders issued by the Custodian of the Two Holy Mosques, King Salman bin Abdulaziz Al Saud, on the case of the tragic and painful event that led to the death of Saudi citizen Jamal Khashoggi – may God rest his soul; including directives by the Attorney General to investigate the disappearance followed by the formation of a committee to review procedures and the dismissal of a number of officials, comes as a continuation of the Kingdom’s efforts to seek justice in accordance with Saudi laws, and to uphold accountability, especially if it concerns one of the Kingdom’s citizens, in a swift and decisive manner, regardless of the circumstances.
These measures reflect the leadership’s commitment to the security and wellbeing of all Saudi citizens. It also reflects the determination of the leadership to hold those directly responsible accountable, and to insure tragic errors like this never happen again by including corrective measures.
The source added that the Kingdom’s government appreciates the distinguished cooperation of the Republic of Turkey under the leadership of President Recep Tayyip Erdogan whose efforts and cooperation importantly contributed to the investigation into the killing of Saudi citizen Jamal Khashoggi.
The Kingdom of Saudi Arabia also appreciates the wise positions of countries that preferred to wait on investigation procedures and evidence; avoiding unfounded speculations and allegations.
“The case of the disappearance of the citizen Jamal bin Ahmed Khashoggi drew the attention of the Kingdom of Saudi Arabia at the highest levels, and due to the circumstances surrounding his disappearance, the Kingdom took the necessary procedures to clarify the truth and began by dispatching a security team to Turkey on 6 October 2018 to investigate and cooperate with counterparts in Turkey.
That was followed by the formation of a joint security team between the Kingdom and the Republic of Turkey, with a permission given to the Turkish security authorities to enter the Consulate of the Kingdom in Istanbul and the residence of the Consul, for the Kingdom’s keenness to clarify all the facts, as the Custodian of the Two Holy Mosques King Salman bin Abdulaziz Al Saud has issued an order to the Public Prosecutor of the Kingdom of Saudi Arabia, No. 5709 dated 3/2/1440 H to conduct investigations into the case.
The Public Prosecutor has already investigated a number of suspects on the basis of information provided by the Turkish authorities to the Joint Security Team to determine whether any of them had any information or relation to what has been happened related where the information that transferred to the security authorities indicated that the citizen Jamal Khashoggi had left the consulate.
In implementation to the directives of the leadership of the need to clearly know the truth and declare it transparently whatever, the preliminary investigations conducted by the Public Prosecution showed that the suspect had traveled to Istanbul to meet with the citizen Jamal Khashoggi as there were indications of the possibility of his returning back to the country.
The results of the preliminary investigations also revealed that the discussions that took place with the citizen Jamal Khashoggi during his presence in the consulate of the Kingdom in Istanbul by the suspects did not go as required and developed in a negative way led to a fight and a quarrel between some of them and the citizen Jamal Khashoggi, yet the brawl aggravated to lead to his death and their attempt to conceal and cover what happened.
The source added that while the investigations are still ongoing into the case with the 18 Saudi detainees, the Kingdom expresses its deep regret at the painful developments that have taken place and stresses the commitment of the authorities in the Kingdom to bring the facts to the public opinion, to hold all those involved accountable and bring them to justice by referring them to the competent courts in the Kingdom of Saudi Arabia.”