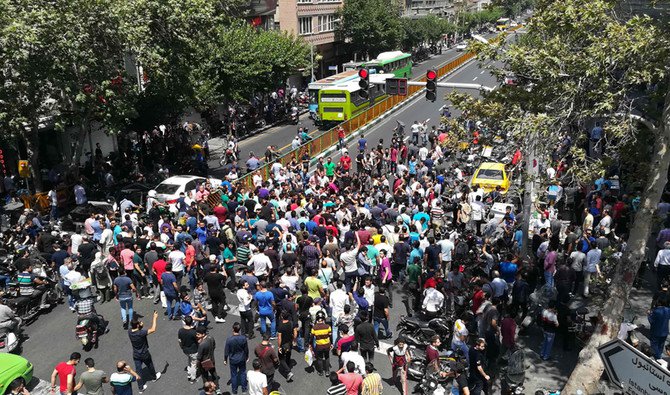 JEDDAH: (DNA) –  Store operators in bazaars across Iran have joined a strike by truck drivers as civil unrest grows in the face of a collapsing economy.The protest by merchants began in the city of Shiraz and spread rapidly to more than 50 cities in 21 provinces.

Photos posted online by opposition activists showed shops with their shutters pulled down during normal working hours in Karaj, 50 km west of Tehran. Stores were also closed in Tabriz, Isfahan, Ardabil and the southern city of Qeshm.

The merchants are protesting against rising prices, the declining value of the Iranian rial and other economic grievances.

They have joined truck drivers in 300 Iranian cities who have been on strike for nearly three weeks in protest at low wages and the soaring cost of spare parts for their vehicles, especially tires.

Again, videos and photos posted online showed factories in Fars Province forced to load goods onto small pick-up trucks because of the drivers’ strike, and trucks were parked idle in loading terminals in Doroud in Lorestan province after truckers and tanker drivers refused to work.

Iranian authorities have arrested more than 200 striking truck drivers and accused them of being “bandits.” A court in Qazvin province has demanded the death penalty for 17 of those detained.

At the heart of the civil unrest is a collapsing economy after US President Donald Trump withdrew in May from the 2015 deal to curb Iran’s nuclear program, and reimposed economic sanctions in August. Further sanctions targeting Iran’s oil trade come into effect on Nov. 4.

“The truck drivers’ protests are an extension of other demonstrations and uprisings that have been taking place throughout the year,” the Iranian-American Harvard scholar Dr. Majid Rafizadeh told.

“Much of the Iranian population is facing dire economic conditions. This misalignment between their fortunes and those of the Iranian regime has contributed to the sentiments expressed in the latest protests. Many of the thousands of demonstrators blame the regime’s political and financial corruption, support for foreign militia groups, mismanagement of public funds, and military adventurism across the region for a significant portion of the hardships they are facing.

“It is also important to point out that the protesters decry economic mismanagement, but also express broader political frustrations with the theocratic establishment.”