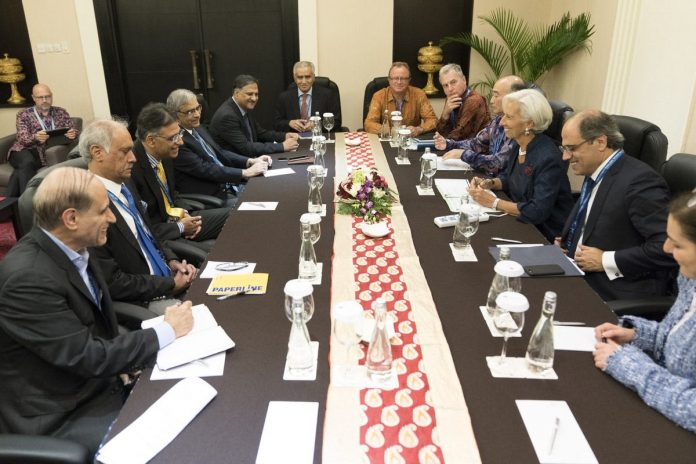 NUSA DUA (DNA) – IMF chief Christine Lagarde met with Pakistani delegation headed by Finance Minister Asad Umer on Thursday and said a team would visit Islamabad for talks on a possible bailout of its shaky economy.Pakistan Finance Minister Asad Umar, who is attending the Fund’s annual meeting in Bali, announced earlier this week that the government would seek talks with the IMF on a “stabilisation recovery programme”.

Lagarde earlier Thursday said the IMF had yet to receive anything formal from Islamabad but that she would meet with the Pakistani delegation in Bali.

“During the meeting, they requested financial assistance from the IMF to help address Pakistan’s economic challenges,” Lagarde said in a statement.

“An IMF team will visit Islamabad in the coming weeks to initiate discussions for a possible IMF-supported economic programme.”

Prime Minister Imran Khan on Wednesday vowed to steer the country out of a looming balance-of-payments crisis, saying it needs $10-12 billion.

“We will get out of this. I will take (the country) out of this,” he said.

Khan’s new administration took office in August vowing to weigh up whether to seek an IMF bailout as it sought other avenues of financing.

He has sought loans from friendly countries, promised to recover funds stolen by corrupt officials, and embarked on a series of populist austerity measures.

But help has been in short supply and economists’ warnings have grown increasingly urgent.

Pakistan has gone to the IMF several times since the late 1980s. The most recent was in 2013, when Islamabad got a $6.6 billion loan to tackle a similar crisis.

Earlier on Wednesday, Asad Umar held a number of meetings on the sidelines of the World Bank/IMF Group Annual meetings in Bali.

Finance Minister met with his Indonesian counterpart Sri Mulyani Indrawati and discussed matters pertaining to expansion of bilateral cooperation between the two countries. Finance Minister Umar emphasized expanding Pak-Indonesia trade relations. The Minister in this regard called upon the Indonesian side to expedite the process of ratification of the additional tariff lines granted to Pakistan after comprehensive review of the PTA in 2017.

Congratulating the Finance Minister on assuming the office after recent elections in Pakistan, Sri Mulyani Indrawati reaffirmed Indonesia’s desire to expand bilateral relations and assured her support to address the points raised by the Pakistan side.

Finance Minister, Asad Umar later had a meeting with the President of World Bank, Dr. Jim Yong Kim. During the meeting the current level of Pak-World Bank cooperation was reviewed. The Finance Minister shared with the World Bank leader, the vision of the new government and its priorities.