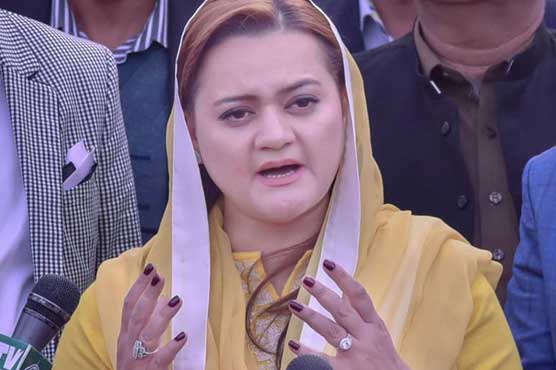 LAHORE (DNA) – Former federal minister and Pakistan Muslim League-Nawaz (PML-N) spokesperson Marriyum Aurangzeb on Tuesday demanded the government to inform the masses on the conditions on which it decided to approach the International Monetary Fund (IMF).

Addressing a press conference in Lahore on Tuesday, as the dollar closed at its highest ever rate of Rs133.6, she termed the rupees record fall against dollar in one day a conspiracy.

The PML-N spokesperson went on to say that the government’s tall claims exposed as it dropped inflation bomb on public, adding that the prices of gas and electricity has been increased before any deal with the IMF.

Regarding the arrest of PML-N president Shehbaz Sharif, she said that the opposition leader was targeted in political revenge, adding he was arrested on mere assumptions.

Marriyum accused the government of working on international agenda and the China-Pakistan Economic Corridor (CPEC) was being made controversial.

On Monday, the government had announced that it has decided to start negotiations with International Monetary Fund (IMF) for stabilization and recovery of national economy.

The finance minister had said that difficult decisions the government has to take will help stand the national economy on its feet.

Asad Umer went on to say that the government wants to create such an environment where the cycle of going to international financial institutions is not repeated by successive governments.

Pakistan will formally approach the IMF for support and Finance Minister Asad Umar will hold talks with officials during the lender’s annual meetings in Bali this week. Umar had said in August that the government may need more than $12 billion.