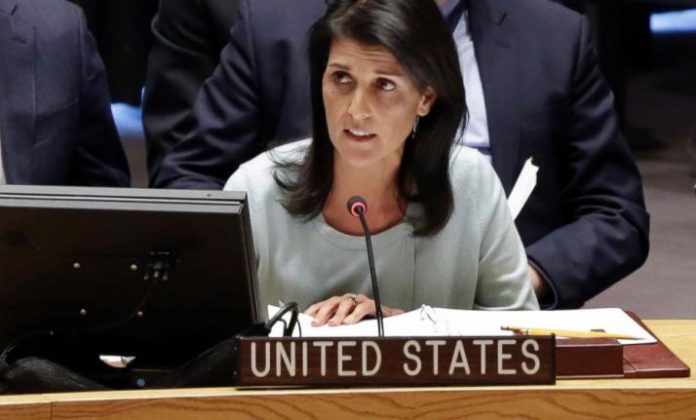 WASHINGTON, (DNA) – Indian-origin diplomat Nikki Haley has reportedly resigned form the post US ambassador to the United Nations today. The American media, quoting sources, claimed that the former South Carolina governor had sent her resignation directly to President Donald Trump, who has already accepted it. Senior most Indian-American in the Trump Administration, Haley was appointed on the post four days after Trump took charge in January 2017.

Haley has dismissed the rumours that her resignation was aimed at a possible 2020 presidential run. Instead she has reportedly claimed that she will campaign for President Trump’s re-elections.

Haley will meet the US President at the Oval Office in Washington DC at 10:30 am (local time). The meeting is open to the press pool, the White House spokesperson Sarah Sanders said on Twitter.  Sharing the news on his own Twitter handled, President Trump said: Big announcement with my friend Ambassador Nikki Haley in the Oval Office at 10:30 am.

At the conference, Trump told media that Haley will leave her post by the ‘end of the year’.

The reason for her resignation was not known immediately. However, ethics groups had recently requested an investigation into Haley over whether she inappropriately accepted flights from South Carolina businessmen.

Born as Nimrata Randhawa to Indian migrants to the United States, Nikki Haley had charted her own course during the Trump administration, admitting in a recent op-ed that sometimes she disagrees with the president. Her op-ed was a response to an anonymous op-ed published in the New York Times from someone who identified as a senior administration official. Haley’s op-ed was headlined, “When I challenge the president, I do it directly. My anonymous colleague should have, too.”