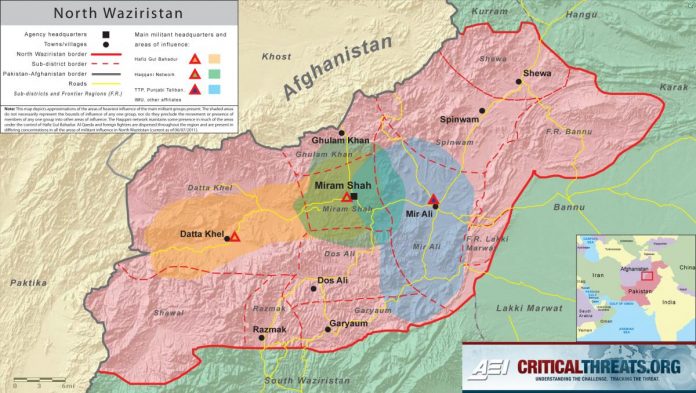 Ever since the Pakistan Army operations, Zarb-e-Azb and Radd-ul-Fasaad, have gained successes and resultantly the terrorists hiding in North Waziristan and elsewhere have fled to Afghanistan, the TTP has changed its strategy to target Pakistani forces from across the border.

A number of incidents have taken place so far, which caused damage to not only the fence erected by Pakistan but also loss to human lives including that of the security forces.

This is the reason the Pakistani forces are observing the maximum alert and thus giving timely response to the terrorists entering Pakistan for conducting terrorist activities.

Terrorists frequently use their bases, sanctuaries and safe havens provided by local warlords in Afghanistan as a springboard for launching attacks in Pakistan.

Pakistan has time and against lodged protests with Kabul, but President Ashraf Ghani’s administration has failed to take meaningful action.

Despite having erected fence and stepped up manning of the border, the terrorists sneak into Pakistan’s side and conduct terrorist activities.

On October 2, the vigilant Pakistan Army repulsed a fresh cross-border attack in North Waziristan, killing at least seven terrorists and injuring three others. Last month, in September, at least nine terrorists were killed in an intelligence-driven operation in North Waziristan which also resulted in the martyrdom of seven servicemen, including an officer.

One June 2, 2018, Pakistan security forces killed six terrorists who launched raids and physical attacks from the Afghan side of the border to disrupt border-fencing work in Khyber-Pakhtunkhwa and Balochistan.

The cross border raids were carried out by terrorists in Bajaur Agency and Balochistan’s Qamar Din Qarez. In Bajaur, there were at least 7 attempted attacks from across the border.

Pakistan is in process of building a fence along the 2600km long pours border with Afghanistan in order to consolidate the gains of successful kinetic operations.

On June 14, 2018, the terrorists attacked the security forces in Shawwal, North Waziristan; the exchange of fire resulted in the martyrdom of three army soldiers, while five terrorists met their fate.

In fact, the terrorists from across the Pakistan-Afghanistan border attempted multiple physical and fire raids on the Pakistan Army posts along Pak- Afghan Border in Shawal. Those martyred included Havaldar Iftikhar, resident of Sargodha, Sepoy Aftab from Chitral and sepoy Usman resident of Gujrat.

On June 14, 2018, the terrorists attacked the security forces in Shawwal, North Waziristan; the exchange of fire resulted in the martyrdom of three army soldiers, while five terrorists met their fate.

In fact, the terrorists from across the Pakistan-Afghanistan border attempted multiple physical and fire raids on the Pakistan Army posts along Pak- Afghan Border in Shawal. Those martyred included Havaldar Iftikhar, resident of Sargodha, Sepoy Aftab from Chitral and sepoy Usman resident of Gujrat.

In a similar incident occurred on April 7, 2016, at least a dozen militants were killed while six others were apprehended as security officials repulsed a cross-border attack on a security check-post in Kurram Agency.

According to political authorities and Frontier Constabulary in Parachinar, Kurram Agency’s headquarters, between 50 and 60 unidentified militants from across the border attacked a security check-post in Mangora Sar area in Lower Kurram Agency, but the troops posted at the check-post were alert and retaliated.

In the ensuing exchange of fire, security forces managed to kill at least 12 militants and injured six others. No security official was reported to have been injured in the attack. Officials added that the retaliation from security forces caused the remaining militants to retreat towards Afghanistan.

The injured militants were taken into custody by the troops. A large cache of arms and ammunition left behind by fleeing terrorists was also confiscated. The security forces immediately took control of the area after the attack and tightened security measures.

Militants from across the border launch attacks on check-posts in Kurram Agency from time to time. In February, 15 militants were killed when security forces repulsed a similar cross-border attack on a check-post in Shabuk. At least one security official was injured in that attack.

On August 11, 2012, nine militants were killed and several others were injured as security forces repulsed a cross-border assault on a check post in the Bin Shahi area of Barawal Valley.

Two security personnel were also killed when they stepped on land mines during the battle, an official said. Dozens of terrorists from Afghanistan sneaked into Pakistani territory around 2:00 pm and attacked the check-post, in which two personnel identified as Jamil and Mumtaz were killed when they stepped on a mine while fighting the attackers. One security official, identified as Mudassir, was injured. The exchange of fire continued till 6:00 pm in which nine militants were killed and 13 injured. The attackers took the bodies of their fallen comrades and injured with them back to Afghanistan. The same week, Pakistan security forces repulsed a similar attack on a security check post in the area, killing two militants. In June, 17 security personnel were killed when dozens of militants from Afghanistan stormed security check posts in the Sunai Darra and Gulunu Sar areas of Barawal.

These attacks clearly indicate that one, the Afghan government has failed to stop such incidents despite having NATO and ESAF assistance, border management and sophisticated surveillance or monitoring gadgets installed in their own side of border. Two, despite assurances on part of Kabul government, there have been no progress in the talks meant to sort out issues including the border security through dialogue. High powered delegations either led by Afghan National Security Advisor or other high ranking officials, and their talks as part of the new mechanism recently agreed between the two countries, have failed to materialize a meaningful halt in the cross-border attacks. Three, the absence of the Afghan government’s writ in its border regions, like in many other areas of the country, facilitates terrorists in carrying out such attacks. Four, Kabul is reluctant to dismantle these sanctuaries despite repeated requests from Islamabad. Instead it blames Pakistan for sheltering the Afghan Taliban.

Pakistan and Afghanistan have already reached an agreement to operationalize Afghanistan-Pakistan Action Plan for Peace and Solidarity (APAPPS), which provides a framework to strengthen mutual trust and deepen interaction in all spheres of bilateral engagements. It is also a mechanism for finding solutions to bilateral areas of concern. It is advisable that both the countries must follow APAPPS in letter and spirit so that the gains achieved against the common enemy may be consolidated and peace brought back to the region. Any attempt to disrupt peace efforts will further prolong the ongoing chaos, and diminish the hope of peace and tranquility in the region.

(The author is freelance columnist based in Islamabad)