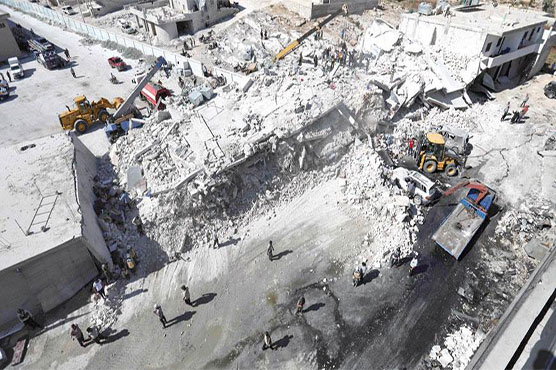 SARMADA, (DNA) – An explosion at a weapons depot that toppled buildings in a rebel-held town of northwest Syria killed at least 39 civilians including a dozen children Sunday, a monitor said.An correspondent at the site in Sarmada in Idlib province near the Turkish border said the explosion of unknown origin caused the collapse of two buildings.

A civil defence source told AFP that rescue workers had pulled out “five people who were still alive”.

But the death toll rose as more bodies were retrieved from the rubble, according to Rami Abdel Rahman, head of the Syrian Observatory for Human Rights monitoring group.

“The explosion occurred in a weapons depot in a residential building in Sarmada,” said the head of the Britain-based monitor, which relies on a network of sources inside Syria.