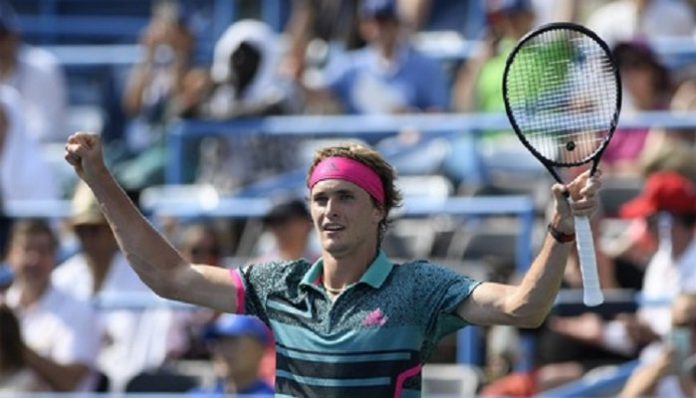 BERLIN, (DNA) – Alexander Zverev says defending his ATP Washington Open title Sunday shows growing in strength and maturity, but the world number three still sees a big gap to Rafael Nadal and Roger Federer.The 21-year-old German won his third title of the year and the ninth of his career by defeating Australian teen Alex De Minaur 6-2, 6-4 in the 50th edition of the US Open tuneup event.

“What a fantastic week for me,” Zverev said. “Winning a tournament on its 50th anniversary is something amazing. This has been a very special week for me.

“(Defending a title) feels great and shows mental strength as well. It shows a little maturity I think.”

While Zverev stands atop a generation of rising young stars, he still puts 20-time Grand Slam winner Federer, 36, and 17-time Grand Slam champion Nadal, 32, on the highest of pedestals.

“Roger and Rafa are still the best out there and still competing for Grand Slam titles,” he said. “I haven’t won a Grand Slam title. Saying I’m on their level wouldn’t be fair to them.”

Not since 20-year-old Rafael Nadal beat 19-year-old Novak Djokovic 11 years ago at Indian Wells had the combined ages of ATP finalists been so young. And not since 1995 in Buenos Aires had all four semi-finalists been 21-or-under, Zverev being the eldest.

“It’s not only me that’s the future of the sport. I think everybody who made it to the semi-finals is the future,” Zverev said. “We all want to be the best. Some of us already think we’re the best. We all have a lot of talent.”