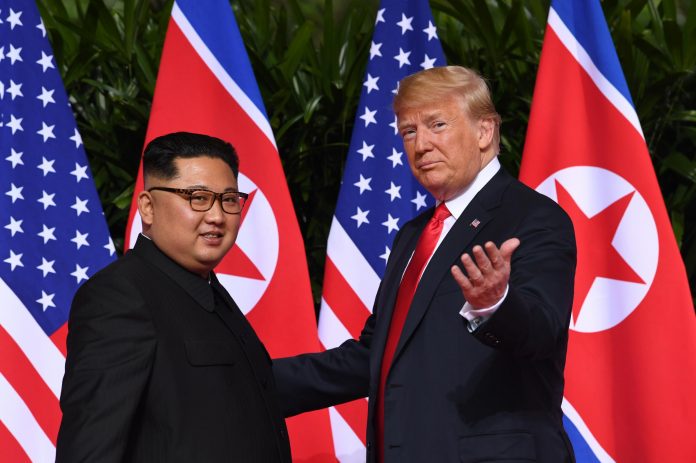 WASHINGTON, (DNA) – Continued negotiations between the United States and North Korea hinge on Washington’s willingness to make a “bold move” and agree to a peace treaty with Pyongyang, according to an official with close knowledge of North Korea’s position on the matter.

If the US is unwilling to replace the armistice agreement that ended the Korean War with a permanent peace that would ensure the survival of North Korean leader Kim Jong Un’s regime, Pyongyang will likely not proceed further with denuclearization talks, the source said.
The establishment of a legally binding peace treaty would require the approval of two-thirds of the US Senate.
North Korea is putting pressure on the administration of US President Donald Trump to begin lifting sanctions, according to the official, believing they have done “so much” by freezing nuclear and missile testing, destroying one of their nuclear sites, and facilitating the upcoming repatriation of US service members’ war remains.
For his part however, Trump has privately expressed frustration over the perceived lack of progress in the talks, according to a US official, though he regarded the testing freeze as a positive sign.
Both Trump and his secretary of state, Mike Pompeo, have been urging patience since Trump held an historic summit with North Korean leader Kim Jong Un in Singapore last month.
Pyongyang and Washington have technically been at war since 1950, and their relationship has been defined by decades of mistrust and failed agreements. Trump’s meeting with Kim was the first time sitting leaders of the two countries have ever met.
“We have no rush for speed … We have no time limit. We have no speed limit. We have — we’re just going through the process. But the relationships are very good,” Trump said last week.

One of the agreements at the Singapore meeting was to “work toward complete denuclearization of the Korean Peninsula,” a notoriously vague phrase that experts say is viewed differently by Washington and Pyongyang.
Pyongyang also committed to returning the remains of US soldiers killed during the Korean War. A US official told that Washington is expecting the return of the first group of remains on July 27, the anniversary of the signing of the armistice which paused the Korean War and established the demilitarized zone that divides the two Koreas to this day.
Critics of the Singapore deal claim the document lacks specifics and does not tie North Korea to a firm timetable on denuclearization or giving up its current nuclear weapons.
Both Pompeo and Trump have argued there is no daylight between the two governments’ positions on Pyongyang’s nukes.
“It’s really pretty straightforward … Chairman Kim made a promise. Chairman Kim told not only President Trump, but (South Korean) President Moon that he was prepared to denuclearize,” Pompeo said Friday.
“The scope and scale of that is agreed to. The North Koreans understand what that means. There’s no mistake about what the scope of denuclearization looks like,” said Pompeo.
Trump and Kim also agreed to the “building of a lasting and robust peace regime on the Korean Peninsula,” including the providing of “security guarantees” to North Korea.
Pyongyang has frequently expressed concern that without a nuclear deterrent it could face attempted regime change or other military action by the US, particularly while the two countries are technically at war.
Ending the Korean War was also a key element of the Panmunjom Declaration agreed earlier this year by Kim and South Korean President Moon Jae-in.

North Korea’s ongoing negotiations with Seoul have also run into a hurdle this month, on Saturday demanding South Korea repatriate a group of North Korean restaurant workers thought to have defected across the border.
In May, the women’s manager at the restaurant where they worked claimed he tricked them into doing so on behalf of South Korea’s spy agency, the National Intelligence Service (NIS).
the failure to return the women to North Korea could impede efforts to improve North-South relations, including next month’s planned reunion of families separate by the Korean War.
UN special rapporteur on human rights North Korea, Tomás Ojea Quintana, said earlier this month that if the women had been taken to South Korea unwillingly “that is considered the crime.”