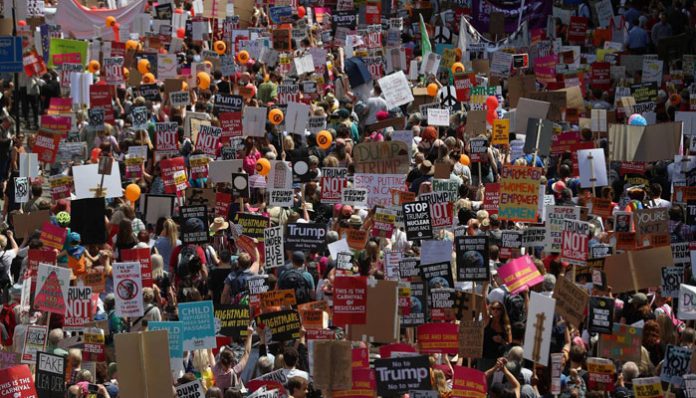 LONDON, (DNA) – Tens of thousands of protesters demonstrated in London on Friday against US President Donald Trump, whose four-day visit to Britain has been marred by his extraordinary attack on Prime Minister Theresa May´s Brexit strategy.”#DumpTrump”, “This is the carnival of resistance” and “My mum doesn´t like you! And she likes everyone” read some of the signs held up by protesters as they marched down Oxford Street towards Trafalgar Square.

“No Trump, no KKK, no fascist USA!”, the protesters chanted.

Some protesters banged on pots and pans, others blew on trumpets and many held up orange “Stop Trump” balloons.

One woman wore a pink knitted “pussy hat” at the start of the “Women´s March”, which will be followed later in the day by the main “Together Against Trump” coalition.