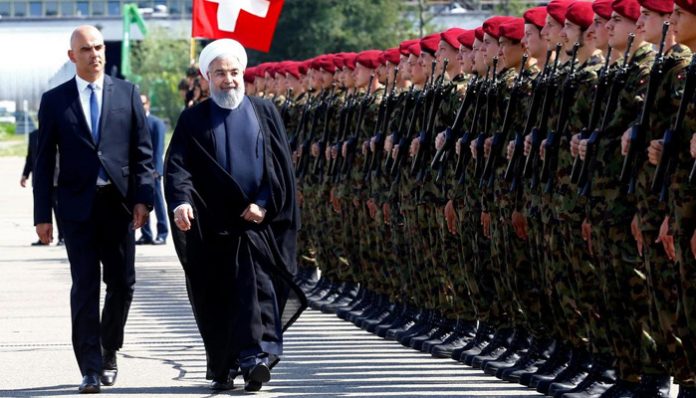 BRUSSELS: (DNA) –  Belgium, France and Germany have detained six people, including an Iranian diplomat, over an alleged plot to bomb a weekend rally by an exiled Iranian opposition group in Paris, authorities and sources said Monday.The apparent foiled attack was to have targeted a meeting of thousands of Iranian opposition supporters in a northern suburb of the French capital that was also attended by leading US figures, including close allies of President Donald Trump.

The developments came on the day Iranian President Hassan Rouhani arrived in Switzerland on a visit that Tehran said was of “crucial importance” for cooperation between the Islamic Republic and Europe after the US withdrawal from the Iranian nuclear agreement.

Rouhani is also due to visit Austria, which currently holds the six-month presidency of the European Union, and hosts the detained Iranian diplomat.

“How convenient: Just as we embark on a presidential visit to Europe, an alleged Iranian operation and its ´plotters´ arrested,” Mohammad Javad Zarif tweeted .

“Iran unequivocally condemns all violence and terror anywhere, and is ready to work with all concerned to uncover what is a sinister false flag ploy,” he said.

Federal authorities in Brussels first revealed the arrests, charging a husband and wife described by prosecutors as Belgian nationals “of Iranian origin”.

Amir S., 38, and Nasimeh N., 33, “are suspected of having attempted to carry out a bomb attack” on Saturday in the Paris suburb of Villepinte, during the conference organised by the People´s Mujahedin of Iran, a statement from the Belgian federal prosecutor said.

The couple were carrying 500 grams (about one pound) of the volatile explosive TATP along with a detonator when angroup elite police squad stopped them in a residential district of Brussels.

The statement said that an Iranian diplomat at the embassy in Vienna, a contact of the couple, was also detained in Germany.

In France three people were taken into custody Saturday, a security source said on Monday — two of them later released.

In Belgium, police carried out five nationwide raids on Saturday, authorities said, though they refused to detail the results.

The Belgian statement said about 25,000 people attended the rally in France where people waved the red, green and white flag of the National Council of Resistance of Iran (NCRI), and cheered its leader Maryam Rajavi.

The NCRI groups some exiled opposition organisations including the former rebel People´s Mujahedin, which is banned in Iran.

At the rally, former New York mayor and Trump lawyer Rudy Giuliani urged regime change in Iran, saying the prospect was closer than ever after the Islamic Republic was hit by a wave of strikes and protests.

Giuliani called for a boycott of companies “that continually do business with this regime”.

“Freedom is right around the corner,” he said of the recent protests in Iran.

Giuliani and other US politicians have been hugely paid to speak at the annual Paris rally in recent years. Republican firebrand and former House speaker Newt Gingrich also addressed the rally.