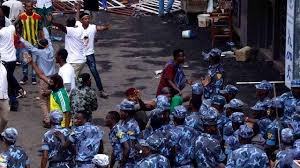 ADDIS ABABA, (DNA) – Several people were killed Saturday in a blast at new Ethiopian Prime Minister Abiy Ahmed’s first rally in the capital attended by tens of thousands of people.Abiy had just wrapped up his speech in the heart of Addis Ababa when the explosion went off, sending panicked crowds towards the stage as the prime minister left hurriedly.

He said the blast was orchestrated by groups who wanted to undermine the rally, without elaborating, according to state-affiliated Fana Broadcasting Corporate.

“All the casualties are martyrs of love and peace,” Abiy was quoted as saying.

The cause of the blast was unknown and further details on the casualties were not immediately available.

Police fired tear gas as they moved in to clear Meskel square where the rally was held, the AFP correspondent said.

It was Abiy’s first public speech in the capital since he took office in April, although he has made several in provincial areas.

In the past three months, Abiy has made major changes in Ethiopia including shaking up the security services, releasing jailed dissidents, moving to liberalise the economy and to resolve a two-decade conflict with arch-enemy Eritrea.

“Ethiopia will be on top again, and the foundations will be love, unity and inclusivity,” he declared on Saturday, dressed in a green T-shirt and a hat.