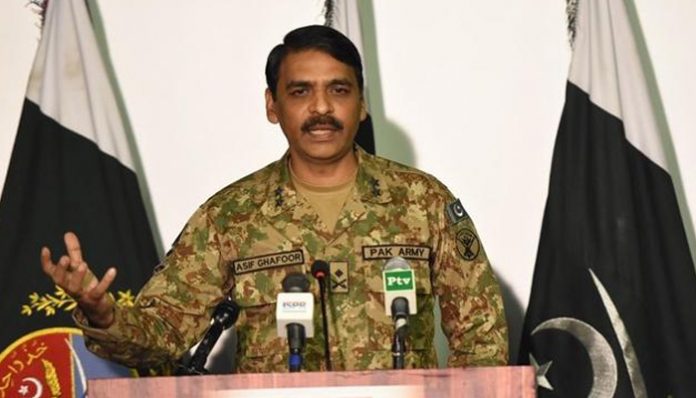 RAWALPINDI, JUNE 04 (DNA) – DG ISPR spokesman Maj-Gen Asif Ghafoor said that Pakistan army would be compelled to retaliate if India targeted civilian population.“DG MO has given an undertaking about respecting the 2003 ceasefire agreement and Pakistan army is committed to uphold it. But we will give a befitting response if Indian army hits our civilian population,” Asif Ghafoor briefed media at GHQ.

“India should decide how it wants to proceed. We are two nuclear powers and there is no space for war,” he said. “If our job is to respect the ceasefire agreement, we will not respond to the first bullet fired at us. But if civilians are the target, we will be forced to retaliate,” he said.

“We request the Indian army and media to improve border situation,” he said. “Recently I had interaction with SAARC journalists including Indians. We took them to North Waziristan.”

“They asked a question that a high-profile incident happens in India whenever ties are improved between Pakistan and India. I told them you have witnessed only two incidents such as Mumbai attacks while Pakistan has faced thousands of such incidents,” he said,” adding Kulbhushan Jadhav is one such example of Indian involvement in fomenting violence.

The DG ISPR said that there were 71 incidents of cross-border terrorism ever since Pakistan started fencing its border with Afghanistan.

“There is no organized militant network, including Haqqanis, in Pakistan. We now want respectful repatriation of Afghan refugees from our country,” he added.

He said that even Americans realize that there was significant after military operations in Waziristan.

The DG ISPR said that Hazara community expressed its joy when LeJ commander Salman Badeni was killed in Balochistan.

He said that terror incidents dropped after the killing of Salman Badeni.

FATA, he said, was not part of Khyber Pakhtunkhwa and everybody should work to build it .