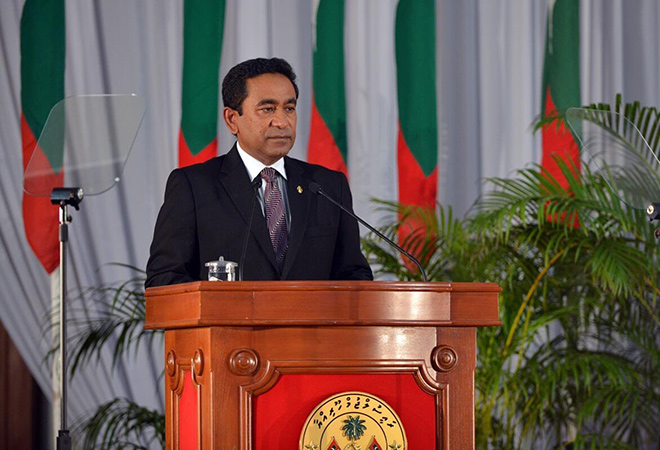 If media reports and analyses are to be believed, version 2.0 of the ubiquitous, yet-forgettable ‘Hindi-Chini bhai, bhai’ slogan from the Nehruvian era may hold the key to removing at least some of the recent avoidable strains in bilateral relations between Maldives and larger neighbour India in the shared Indian Ocean Region (IOR).

Maldives, especially incumbent President Abdulla Yameen, whose camp seems to have had a free run thus far, may have to acknowledge that it could cut both ways for their nation, and that making up with India early on could be one way of doing things.

“China is ready to undertake joint projects with India in Sri Lanka as well as in other countries in the region, such as Maldives and Nepal,” China’s India Ambassador Luo Zhaohui as saying in an ‘exclusive’ interaction over the weekend.

Of course, the reference was to the informal Wuhan summit between Indian Prime Minister Narendra Modi and Chinese President Xi Jinping, where they decided to undertake joint projects in Afghanistan.

But Ambassador Zhaohui extended the possibility to other neighbours of India, including Maldives, though only when asked.

As The Island report too pointed out, “this is the first time that India and China will join hands to take up a joint project in a third country, such as Afghanistan”. As the news report went on to say, Afghanistan’s India Ambassador Dr Shaida Mohammed Abdali too “warmly welcomed the decision of Xi and Modi”. At the Foreign Correspondents’ Club of South Asia in New Delhi, Amb. Abdali said: ”We have been wanting such collaboration of the two Asian giants in my country for a long time. We are delighted that it is happening now.”

It is easier said than done, both on the ground and otherwise. First and foremost, there are issues of inherent suspicions that run deep between India and China, flowing from the 1962 War and the more recent ‘Doklam stand-off’.  In a way, it’s the ‘Doklam deadlock’ that may have inspired Modi and Xi to take a closer look at bilateral relations, and the ‘current irritants’ going beyond the ‘core issue’, at least as sections within the Indian strategic community continue to see the ‘border dispute’.

With the result, Ambassador Abdali’s hopes that Kabul “will be happy if Pakistan too participates in such collaborative ventures in Afghanistan and help us rebuild our country” may have to wait for some more time, given the particular the trilateral nature of the strained relations, where in numbers again, China and Pakistan may be seen as having a 2:1 upper-hand viz India, in the handling of third-nation projects. Even without Pakistani participation, for joint projects in Afghanistan, the Indian psyche would be to hope for the host-nation to take the Indian side where issues needed to be sorted out trilaterally with the Chinese investor-participant.

Whether and how far would Afghanistan be able to play the balancing-act between two ‘giant neighbours’ is a million-dollar question, and would have to be considered on a case-to-case, issue-to-issue basis. It is another question, if and how far would ‘Uncle Sam’, watching over the shoulders of the post-Cold War, geo-strategic Indian partner would go along – and away. That may not be a determinant in the case of India, and more so China, but a ‘weak nation’ like Afghanistan may not be strong enough to stand up and/or resist, if and when it came to that.

In Chennai, over the very same weekend, Maldivian Ambassador to India Ahmed Mohammed blamed the ‘Indian red-tape’ for China gaining an upper-hand in Maldivian affairs, especially in terms of investments. “There is more project funding that is coming from China into Maldives, when compared to what’s coming from India. Yes, India’s share is declining but we have never said ‘no’ to encouraging India’s share”, Amb Mohamed, who was on a two-day visit to the south Indian city, was quoted by the Deccan Chronicle as telling a ‘select media briefing’.

Explaining that the “dynamics of politics” has changed since the new Constitution came into being in 2008 and brought in the multi-party system, Ambassador Mohamed told the that a President now has to fulfil his promises made in the previous poll, to seek his second term. “He must accomplish promises before the term of five years, or else people will reject him even before the election. That’s how you would see lot of development has come up post-2008, and projects move much faster now.”

In this context, the ambassador said, “we approach all our bilateral partners to provide project-funding. We don’t ask for grants; we ask for loans, concessional loans. India also has provided through Exim Bank funding for some housing projects and road constructions. But can I say provide more funding for more projects? That’s not our call. If you want to promote your interests in Maldives, it is your responsibility, not mine.”

In this context, the Deccan Chronicle quoted the ambasssador further: “Everybody talks of China having deep pockets. I am sure India is equally rich. India has rich resources, big population…But the system is different,” he said, implying “while the Chinese took quick decisions, the Indian system was bogged down in bureaucratic red-tape”.

To a specific question from the newspaper if India was acting like a ‘Big Brother’ to Maldives, the ambassador said: “We want India to be big brother to us; a good big brother…“Every time Maldives was in crisis, India was the first to reach out to us — the 1988 physical attack, 2004 tsunami and the (Male drinking) water crisis in 2014. This has been our biggest strength as great neighbours. We cannot wish away our geographical and cultural proximity.”

Not the first one to blame

Ambassador Mohamed is not the first from the neighbourhood to blame the scheme and system, compared to China’s, for the slow progress of project-funding from the larger South Asian neighbour. Former Sri Lankan President Mahinda Rajapaksa, too, had said so, pointing often to his reversing of predecessor Chandrika Bandaranaike-Kumaratunga’s decision on the ‘Hambantota project’, which ultimately went the China way.

Yet, neither has said it all. Be it Sri Lanka then or now, or Maldives, especially now under incumbent President Abdulla Yameen, Ambassador  Mohamed’s boss, their regimes and systems, if any, too have been going slow on processing and clearing projects in which India had evinced an interest. The list is endless, but they have had the convenience to blame it all on the ubiquitous ‘Indian red-tape’, despite they too claiming to be democracies like India’s – but also because other ‘western, liberal friends’ of India, and their creations in the IMF and the World Bank too have been saying.

In the case of Maldives, Yameen, then in the political Opposition, did everything to put spokes in the ‘GMR airport contract’ involving the Indian infrastructure major when then President Mohammed Nasheed cleared the project and sought to fast-track the same through the Male airport board first, and Maldivian Parliament, when political opponents sought to tie down his hands in the matter. Later, when President Mohammed Waheed took Nasheed’s place, once again Yameen was at the forefront of the ‘Islamic rally’ that was opposed as much to the ‘GMR deal’ as to Nasheed and his MDP, and ensured that the contract was scraped.

Yameen was in power when the Singapore arbitration court threw out Maldives’ explanations on the deal-decision, and ordered huge compensation and damages. The Yameen leadership would rather pay up the dues when the Treasury did not have as much money rather than use it as a bargaining-chip for making GMR see ‘reason’ on a host of genuine Maldivian concerns, including one pertaining to a second run-way space that the Indian concessionaire had sought to ‘occupy’.

What Ambassador Mohamed did not mention in Chennai pertained to the new, Yameen version of Maldives’ foreign policy, which he unveiled on 20 January 2014, just two months after coming to power and three weeks after his New Year Day maiden overseas visit as President to New Delhi. The foreign policy enunciation clearly indicated that for Maldives to be politically strong, it had to become economically independent. In the background of the aborted GMR contract, it was clear which way the wind was blowing – or, was not supposed to blow, any more.

Better or worse still, much of the airport contract, and more, went to Chinese firms since then. The list included the highly imaginative and possibly less-productive Male-Hulhule sea-bridge, connecting the capital city to the airport-island. In all this, Ambassador Mohamed’s observations about political leadership’s wanting to have ‘completed projects’ convincing their respective constituencies about the competence of the incumbent holds good, maybe.

But then in neighbouring Sri Lanka, despite the Rajapaksa government doing enough and more on the ‘development front’, incidentally again with Chinese funding, the voters rejected him outright in the elections in 2015 on other ‘democracy’ issues . Whether it may hold good or not in Maldives is a different thing, and may be known in the upcoming presidential polls of September-October, where the four-party Joint Opposition (JO) under the jailed and self-exiled Nasheed has raised similar ‘democracy concerns’, at times worse than those that were flagged against President Rajapaksa in Sri Lanka.

What may be even more pertinent for Yameen, especially in the context of the trilateral equations involving India and China, any return to and of the ‘Hindi-Chini bhai, bhai’ syndrome in the neighbourhood could well seek to end smaller nations’ perceived and/or persistent efforts at playing the other two against each other. China knows that India now is not a walk-over as in the Sixties. At that time, the US and the erstwhile Soviet Union were established ‘super-powers’, and China did not figure anywhere near them. Today, instead, China hopes to make it big in the international arena, where the post-Soviet geo-strategic vacuum seems beckoning it still.

China cannot hope to reach there without mending fences in the immediate neighbourhood – where India matters. Resolving bilateral border row with India may not happen overnight, and both nations readily acknowledge it as such. But creating new irritants and furthering them is not on, and China seems to have understood it, geo-strategically in the case of Doklam, and geo-politically in the case of Sri Lanka and Maldives,  where Beijing hopes to achieve the same through massive investments.

Both measures come with a ‘dead-letter date’ written on them. China is becoming increasingly aware of the same, possibly and especially so after the kind of opposition that the Hambantota debt-to-equity deal faced in Sri Lanka in recent times. It is thus that China now seems to be looking around on all sides, and for opportunities to make up with India more directly than sinking even more money on unviable economic projects, where China may hold a lot of unproductive real estate, if at all, in those nations, like Sri Lanka and Maldives – and nothing more.

The message is also for Maldives, and President Yameen even more, as he prepares to battle along for a second term in office, which he may – or, may not – win, depending on which was the ‘development vs democracy’ wind blows nearer home. But then, if the Sri Lankan experience is also anything to go by, in his or her second term, every Sri Lankan President had found himself marginalised within the party and Parliament, like in the US, where the incumbent’s party is already looking around for a ‘winnable candidate’, who can deliver and whose fancies the party had to pander to, instead!