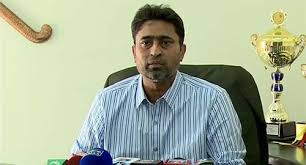 ISLAMABAD, MAY 10 (DNA) – Hockey star Shehbaz senior has been elected as the new President of Islamabad Hockey Association (IHA) as a result of perhaps the most controversial elections in the history of Islamabad hockey association.The IHA election that held the other day under the supervision of Col Aijaz and Musadaq Hussain elected the new office-bearers for the next term. Shehbaz senior surprisingly made an entry in the Islamabad hockey politics and got himself elected as the president.

According to PHF rules somebody looking for a post in the Pakistan Hockey Federation (PHF) must be an office-bearer in a regional hockey association. Shehbaz senior this time decided to do it from Islamabad.

Many clubs did not like the idea of bringing somebody from the outside and who did not have any linkages with the Islamabad hockey but reportedly the President of the PHF Brig. Sajjad and Shehbaz senior himself who is the Secretary General of Pakistan Hockey Federation, put immense pressure on the clubs to vote for him.

So much so the clubs who refused to vote for him were threatened to be stripped off, of the voting rights.

It may also be mentioned here that the election was delayed from morning to till evening because the majority of the hockey clubs was not ready to be part of what they believed controversial election and kept on protesting outside the office of President of the hockey federation. The matter was even highlight by most of the TV channels.

The clubs at the end of the day could not succumb to the pressure  mounted on them by the PHF high ups thereof wily-nily they had to bow to the pressure.

It may also be mentioned here that the Dr. Tanvir has been elected as the Secretary of IHA for the second term. Tanvir is the younger brother of Brig. Akmal who was the Military Secretary to Prime Minister Nawaz Sharif.

Meanwhile the hockey lovers have expressed deep concern over this incident adding tug-of-war for coveted posts has badly demanded the image of the national game. They are of the view, it came as a sheer surprise for them that people like Shehbaz senior were involved in such petty politics.

They say, the PHF officials are supposed to do something good for the national game by promoting merit but how can they do this if they themselves are elected while ignoring the principles of merit and fair play?.-DNA