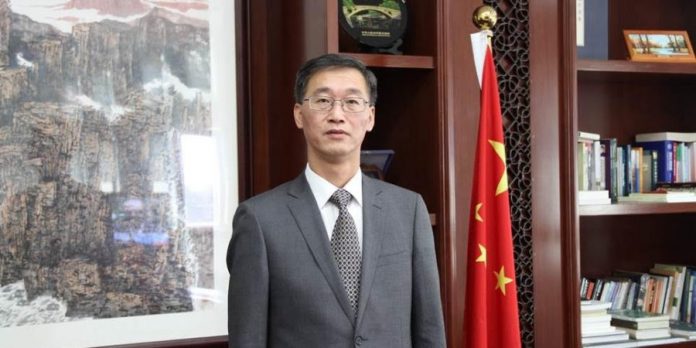 ISLAMABAD, (DNA) China’s “Two Sessions”, the annual meetings of the 13th National People’s Congress (NPC) and the 13th Chinese People’s Political Consultative Conference (CPPCC) attracted attention in Pakistan and worldwide have just concluded.Every year in March, China will hold the “two sessions”, which are major events in the political life of the Chinese people, and important forms of socialist democracy with Chinese characteristics.

They are also important windows for the outside world to understand China’s development.

This year’s “two sessions” have received special attention at home and abroad, because the year 2018 is critical for China’s development.

It is both the beginning of the full implementation of the spirit of the 19th National Congress of the Communist Party of China and the 40th anniversary of China’s reform and opening up. This year’s “two sessions” carry the important task of planning China’s future development, and have a positive impact on China and the world.

The key work of this year’s “two sessions” has five aspects: The first is to amend the Constitution. The first session of the 13th National People’s Congress passed the Constitution Amendment, enshrining Xi Jinping Thought on Socialism with Chinese Characteristics for a New Era and “building a community with a shared future for humanity” into the Constitution. This will have a significant impact on China’s development and diplomatic practice.

The second is the election of new leaders of the state and government. Mr. Xi Jinping was elected as Chinese President and Chairman of the Central Military Commission by a unanimous vote. It reflects the common aspirations of the 1.4 billion people of all ethnic groups in China. For the first time, the new Chinese President, Vice President, and other leaders pledged allegiance to the Constitution, which is of great significance to demonstrate the authority of the Constitution.

The fourth is to promote high-quality economic development. The Chinese economy is shifting from a high-speed growth phase to a high-quality development phase. It is a pivotal stage for transforming of China’s growth model, optimizing its economic structure, and fostering new drives of growth. The construction of a modern economic system is an urgent requirement for getting us through this critical transition and the strategic goal for China’s development. China has set major development targets such as a GDP growth of around 6.5% in 2018, proposed a general principle of seeking progress while maintaining stability, vigorously promoted high-quality development, accelerated the pace of reform and opening up, and fought the three critical battles against potential risk, poverty and pollution, battles that are important for decisively bringing to completion the building of a moderately prosperous society in all respects.

The fifth is to strengthen anti-corruption through the reform of the national supervisory system. The national supervisory system reform is a major political system reform that has a bearing on the overall situation. The first session of the 13th National People’s Congress passed the Supervision Law of the People’s Republic of China and set up the National Supervisory Committee. This will further strengthen the restriction and supervision of the operation of power, and realize the full supervision of all officials exercising public power.

China will always pursue the path of peaceful development, promote to build a new type of international relations and an open world economy. China will deepen good-neighborly friendship and common development with neighboring countries, strengthen unity and cooperation with developing countries, and make greater contribution to world peace, stability and development.

In the coming new era, China-Pakistan relations have ushered in new opportunities for greater development. China is willing to work with Pakistan to advance the construction of China-Pakistan Economic Corridor, realize common development and prosperity, and play an exemplary role in building a community with a shared future for mankind.=DNA