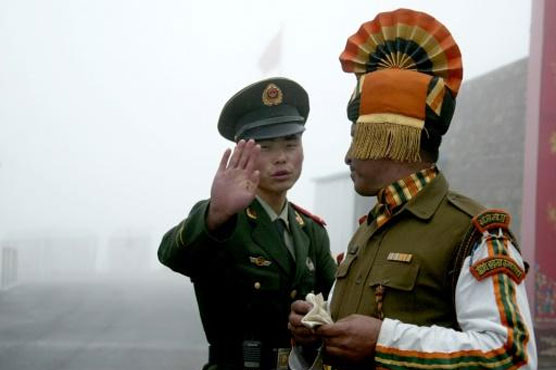 SRINAGAR, AUG 16 (DNA) – Indian and Chinese troops clashed briefly on a disputed area of land in the Himalayas, officials said Wednesday, exacerbating tensions during a months-long stand-off between the two armies. Chinese troops threw stones at Indian soldiers near Pangong Lake, a major tourist attraction in the picturesque mountain region of Ladakh on Tuesday, an Indian defence official said. He said Chinese soldiers had twice tried to enter the Indian territory but had been pushed back.

“There was a minor incident. There was some stone pelting from the Chinese side but the situation was quickly brought under control,” he told on condition of anonymity.

The brief confrontation was resolved after Indian and Chinese sides retreated to their respective positions, he added.

Police in occupied Kashmir, where Ladakh is located, said clashes were relatively common along the de facto border known as the Line of Actual Control (LAC).

“These things happen every summer but this one was slightly prolonged and more serious but no weapons were used,” a police source in Srinagar told.

The latest incident comes amid an ongoing dispute between the two sides over a strategic Himalayan plateau thousands of kilometres away where hundreds of Indian and Chinese soldiers have been facing off against each other for more than two months.

The border trouble began in June when Chinese soldiers started to extend a road through the Doklam territory — known as “Donglang” in Chinese. The area is disputed between China and Bhutan.

India, a close ally of Bhutan, then deployed troops to stop the construction project, prompting Beijing to accuse India of trespassing on Chinese soil.

China has said India must withdraw its troops before any proper negotiation takes place. India said both sides should withdraw their forces together.

The plateau is strategically significant as it gives China access to the so-called “chicken’s neck” — a thin strip of land connecting India’s northeastern states with the rest of the country.

The two nuclear-armed neighbours fought a brief war in 1962 in India’s border state of Arunachal Pradesh.

Tensions along the LAC rose in 2014 when Chinese soldiers moved into territory claimed by India, sparking a two-week military stand-off that overshadowed a visit by China’s President Xi Jinping.=DNA