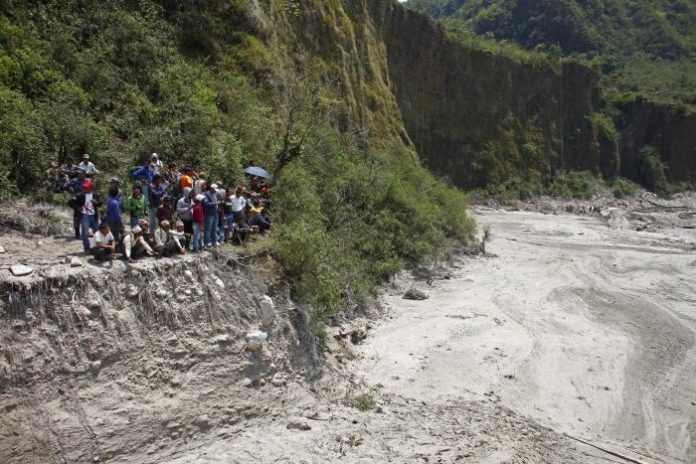 The death toll in rain- triggered floods and landslides in Nepal has climbed to 91 with 38 persons still missing and over six million people affected by natural calamity. Nepal Ministry of Home Affairs said 2,847 houses were completely damaged in the disaster, My Republica reported. “A committee was formed under the coordination of Home Minister Janardan Sharma to tally details of the loss. The chief secretary and secretaries of 12 ministries are members of the committee,” Ram Krishna Subedi, spokesperson of the Home Ministry, was quoted by the report.

The death toll reached 91 as of yesterday evening, the Home Ministry said, adding that normal life in different parts of the country was severely affected while a large number of people were reported displaced by floods, landslides and inundations.

A total of 13 helicopters, including seven of Nepal Army, motorboats, rubber boats and other equipment are being used for search, rescue and relief measures.

Heavy rainfall has lashed Nepal for the past five days, leading to the swelling of several rivers beyond the danger mark and causing flooding and landslides at many places.

Rapti river, which flows through a large part of Nepal towards the southern plains, flooded human settlements and hotels popular with tourists in the Chitwan Valley.

All the 35 Indian nationals, who were stranded in Sauraha, a part of the Chitawan National Park, have been rescued, an Indian Embassy spokesperson said. They were rescued to safer place by using tamed elephants.

Earlier reports quoting local authorities had said that 200 Indian tourists were among the 700 stranded people, but the Indian Embassy official said only 35 of them were Indian nationals.

According to the Ministry of Home Affairs (MoHA), at least 14 people were killed by landslide in Morang district, taking the death toll in the district to 17 and overall to 80.

Thirty five people have been also missing since Friday.The monsoon havoc has affected 27 districts spanning from the eastern, central to the western regions.=DNA