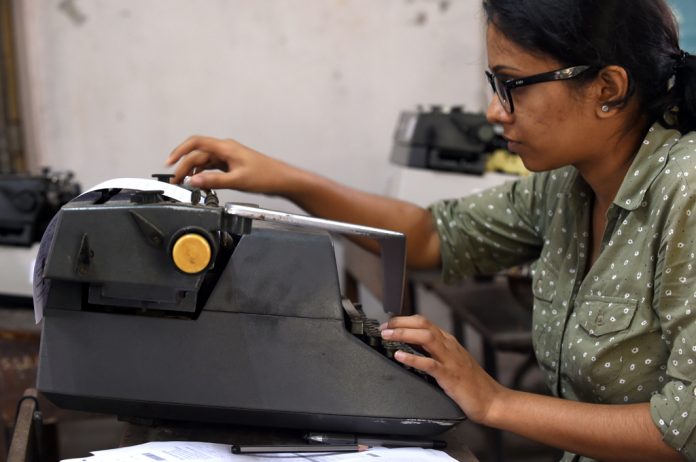 MUMBAI, AUG 10 (DNA) – The unmistakable chatter of typewriters outside courthouses and government offices will soon fall silent in India’s financial capital Mumbai as stenography colleges on Friday hold their final manual exams. The roughly 3,500 institutes teaching the antiquated ways of the typewriter across Maharastra state will be phased out as India pushes ahead with a drive to digitize the economy. “It is absolutely the end of an era as typewriters bite the dust due to technological innovation,” Ashok Abhyankar, who runs a shorthand and typewriting institute in Mumbai.

Long relegated to the history books in the West, typewriters are still a ubiquitous feature at legal chambers, police stations and official offices in India.

Typists are found at courthouses punching out affidavits, family deeds and other legal documents for as little as 25 rupees (39 cents), the click-clack of the ancient machines echoing around the vaulted corridors.

Abhyankar, whose institute has been teaching stenography skills for more than 80 years, estimates roughly 700,000 students across the state sit for official manual typing certification every year.

These certificates are a ticket out of unemployment and village life for many poor youngsters, who pursue typing as a way to land coveted jobs as government clerks and stenographers.

But these skills are becoming increasingly redundant amid “Digital India”, a government-run initiative to modernise and harness technology to roll out e-services across the subcontinent of 1.3 billion.

While the margin bells and ribbon spools will whirr and ping during Friday’s final typing exams, it will not be long before the iconic machine will wind up in antique stores or on scrap heap.

“With falling computer prices and governments phasing out its usage, typewriters have no future anymore,” Abhyankar said.

India was the last country in the world to run a major telegram operation before it shuttered in 2013 after 163 years of service. =DNA