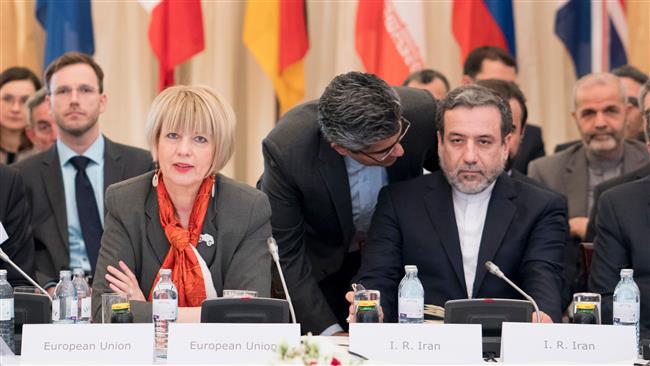 BRUSSELS, AUG 03 (DNA) – The European Union, which supervises the implementation of the landmark July 2015 nuclear deal between Iran and world powers, says all parties to the agreement remain committed to its implementation. Catherine Ray, a spokeswoman for EU foreign policy chief, Federica Mogherini, said on Thursday that the EU was on the opinion that all the seven parties to the agreement had implemented their commitments and would do so in the future.

“So far we consider that all parties have been implementing their commitments under the deal,” said Ray during a press briefing in Brussels, adding, “We expect their continued adherence.”

The official made the remarks when asked to comment on Iran’s statements that Washington had effectively violated the deal by imposing fresh sanctions on the country.

Iran maintains that the United States and six other parties to the deal should refrain from renewing or imposing sanctions on Iran during the time of the agreement which spans for more than 10 years.

The six world powers, namely the US, Russia, China, Britain, Germany and France, have promised under the deal to ease pressure on Iran in return for the country to scale back its nuclear program.

On Wednesday, US president Donald Trump officially signed the bill that imposes new sanctions on Iran allegedly over the country’s missile program. The controversial package of measures, already adopted in the US Congress, also imposes tough bans on Russia and North Korea.

Ray said the EU’s conclusion that Iran deal remained sound was based on the results of a meeting on July 21 in Vienna, where parties to the deal discussed its implementation. She said the meeting chaired by Mogherini also allowed a discussion on the effects of US sanctions on the implementation of the nuclear agreement, adding that the Iranian view was also heard in the meeting.

Mogherini’s office said at the time in a statement that participants in the meeting confirmed their continued adherence to the deal and “stressed the need to ensure its full and effective implementation in a constructive atmosphere.”

Mogherini will travel to Tehran on Saturday to attend a ceremony marking the beginning of the second term of President Hassan Rouhani. Iranian officials, who have unanimously designated the US sanctions as a violation of the nuclear agreement, are expected to raise the issue during their meetings with the top EU diplomat.=DNA