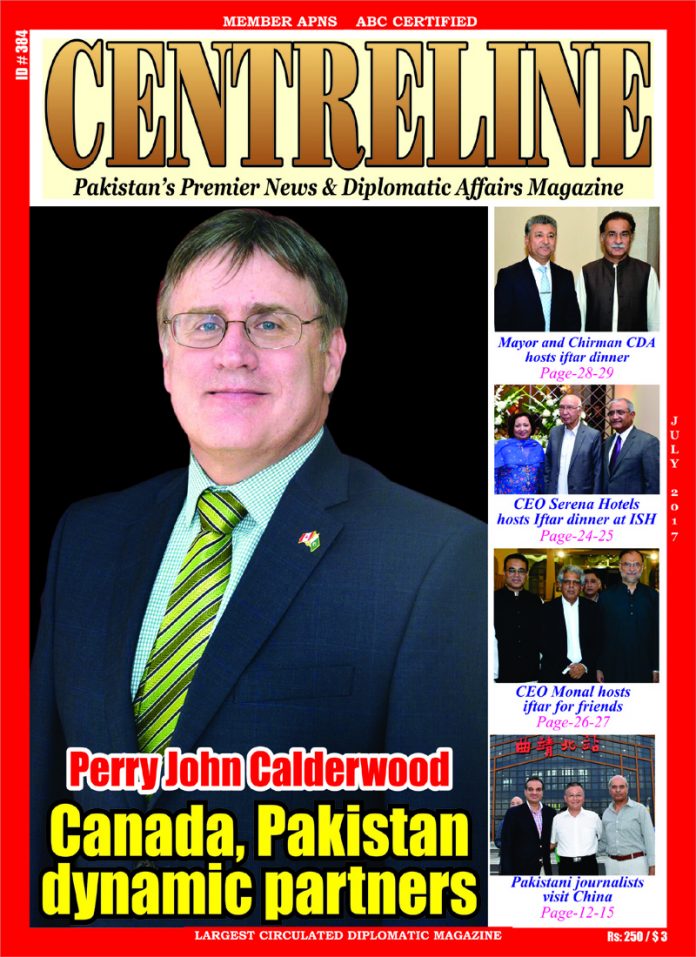 High Commissioner of Canada talks to Centreline and DNA

Let us start with Canada, Pakistan relations, how would you describe these relations in the fields of politics, trade and economy and people to people contacts?

Canada and Pakistan have a broad relationship that spans many areas. It is a dynamic partnership and I believe that there is great potential for further strengthening of our ties in the years ahead. Our two countries maintain ongoing dialogue on many multilateral issues such as climate change and our shared commitment to United Nations Peacekeeping. Our trade relationship is growing. In 2016, two-way trade exceeded $1.4 billion Canadian dollars (about 110 billion PKR), the highest level ever. That said, I believe that there remains significant untapped potential to strengthen trade and investment relations. Canadian companies have great expertise and experience in sectors such as energy, agri-food industry, information and communications technology (ICT), and mining – all of which are sectors in which Pakistan is likely to see robust growth in the years ahead. As for people-to-people relations, I am pleased that there is a large and growing community of Canadians of Pakistani heritage whose members are playing a key role in further building relations between our two countries. Also, a growing number of Pakistani students are choosing Canada as a destination for their university studies. Their presence is enriching our universities and communities, and they represent another strong pillar in the bilateral relationship.

One of the things that has impressed me in my travels around Pakistan and my meetings with a wide range of people is the strong democratic vocation of Pakistanis. Pakistan has made great strides in building its democracy and I am confident that it will continue to make progress in the years ahead in consolidating its democratic culture. Democracy, of course, means free and fair elections and robust political debate of issues. But it also means respect for the rule of law and for the human rights of all, transparency in government, and accountability of political leaders to the people. A strong and healthy democracy and society is one which is inclusive. An important dimension of inclusiveness is respect for gender equality and the full participation of women, as well as men, in political decision-making. Needless to say, government policies affect women as much as men and thus it is important that women be fully involved in setting policies and making laws. In Canada, for the first time in our history, half of the government ministers at the federal level are women. This marks an important milestone in my country’s progress toward full inclusiveness in our political life.

It is obviously for the people of Pakistan to decide how best to pursue the goal of inclusiveness, including of women, in its political institutions and processes. Some countries, including Pakistan, have adopted quotas to increase the representation of women in parliament while others, such as Canada, have made progress by other means. I have been impressed by many Pakistani women whom I have met in senior positions, whether as parliamentarians, civil servants, leaders of civil society or of private sector companies. There is certainly no shortage of talented and committed women in Pakistan who are qualified to assume positions of political leadership.

The promotion of human rights around the world is an integral part of Canada’s foreign and development policy. I have had the privilege of meeting many dedicated Pakistani women and men who are committed to promoting human rights values in Pakistan. They include human rights defenders, political leaders and elected representatives, government officials, members of the media, and many others. I believe that, like Canadians, most Pakistanis want to live in an inclusive society in which the human rights and the dignity of every person are respected. The High Commission maintains regular dialogue with the Pakistani government on how we can work together to advance shared human rights values. And we are also pleased to collaborate with Pakistani human rights NGOs and other partners that are active in promoting a human rights culture.

Canada indeed continues to maintain a significant development cooperation program in Pakistan and our programming is focussed in several priority sectors. One of these sectors is health and, as you have stated, Canada has been particularly active in supporting the campaign to interrupt the transmission of the polio virus. Canada is providing significant funding which is channelled through the World Health Organization (WHO) and UNICEF with the objective of eradicating this terrible disease from Pakistan and the world. With the support of Canada and other partners, Pakistan is making great progress toward this goal which I hope and expect will be achieved very soon. The number of new cases of polio has declined from several hundred as recently as 2013 to just two so far this year. Thus, it is clear that we are very close to our objective and I am pleased that Canada has been able to make a contribution to this accomplishment.

In addition to the health sector, Canada currently funds development programming in Pakistan in the area of education with a focus on improving the quality of primary school teacher training. Hundreds of thousands of public school teachers have benefited from this as have millions of Pakistani children. Another focus of our programming is women’s economic empowerment. I have already spoken about the importance of full participation of women in the political life of a country. Similarly, Canada believes that for a society to achieve its potential, it is important that women, as well as men, have the opportunity to participate fully in its economic life. In this vein, Canada is funding projects in Pakistan designed to develop the entrepreneurial skills of rural women. One more area in which Canadian development cooperation has been present in recent years is that of strengthening governance. Canada has funded projects designed to strengthen the capacity of the Electoral Commission of Pakistan to enable it to organize free and fair elections.

As I mentioned earlier, I am delighted that a growing number of Pakistani students, particularly at the university level, are studying in Canada. At present, there are some 4,000 Pakistani students in Canada and Pakistan has become one of the fastest growing source countries of foreign students. They choose Canada because of the high quality of our educational institutions and the reasonable cost of living. But they are also attracted to Canada because our country offers a safe, multicultural, environment where we celebrate the diversity of our population and welcome students, immigrants and visitors from around the world.

I am also pleased that a number of Pakistani universities have relationships with Canadian counterparts and I hope that in the years ahead the number and depth of such partnerships will increase.

8- Please share with our readers your impressions about Pakistan before coming to Pakistan and now when you have spent some time here?

Canada has a strong and multi-faceted relationship with all of the countries you mention. As in any other part of the world, I believe that it is in the interests of all of the countries of this region to work closely together to advance their development. The people of the region would benefit from greater economic integration, while closer cooperation in combating terrorism, drug trafficking and other crime would improve the security of all the countries.

Your impressions about Pakistan?

While Pakistan is my eighth diplomatic posting, it is my first one in Asia. I am very much enjoying the opportunity to learn about and explore a country and a part of the world which are new to me. I have had a number of Pakistani friends in Canada and have worked closely with Pakistani diplomatic colleagues in other countries where I have served. They had told me about Pakistan and therefore I had a fairly good sense of what to expect before I arrived here.

Since my arrival in Pakistan nine months ago, I have made a special effort to travel within Pakistan as much as possible in order to discover the diversity of your country and to identify ways in which I can contribute to strengthening the ties between Canada and Pakistan. One thing that has struck me is the richness of Pakistan’s cultural heritage. All Pakistanis should be proud of your country’s remarkable culture. Also, I have been impressed by the energy and creativity of the people of Pakistan, especially of the youth. I think Pakistan is a country of great potential and I am confident that progress will continue to be made in the years ahead toward realizing that potential.