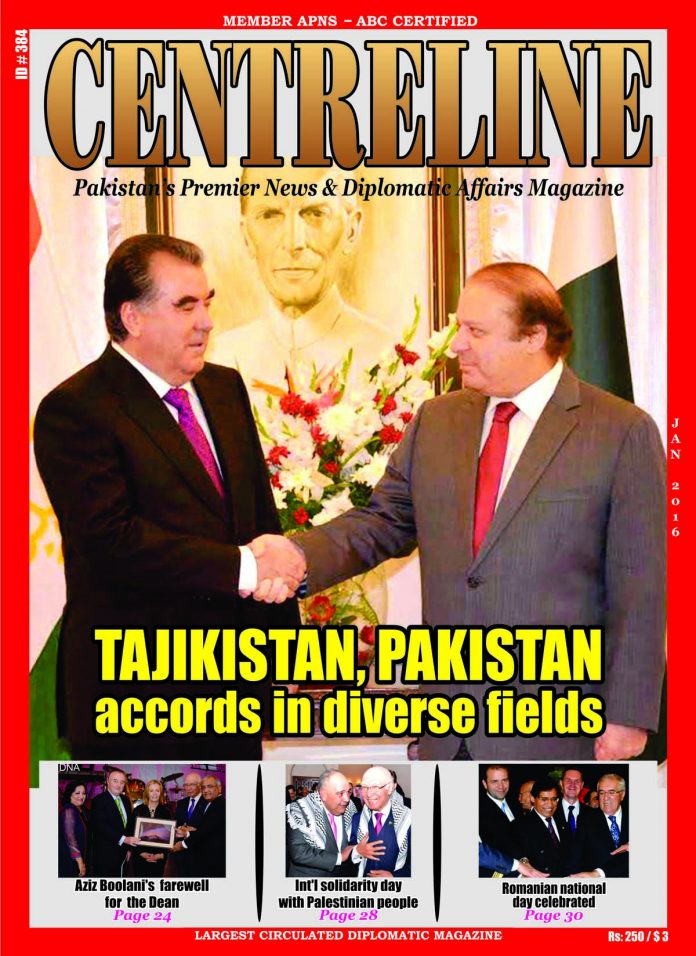 Pakistan and Tajikistan on Nov 12, 2015 inked accords in diverse fields including a Treaty on extradition, an Agreement on energy cooperation and a Memorandum of Understanding on establishment of Joint Business Council. Prime Minister Muhammad Nawaz Sharif and Tajik President Emomali Rahmon witnessed the signing of documents and also signed a Joint Statement, at a ceremony held here at the PM House.

The Extradition Treaty between Pakistan and Tajikistan was signed by PM’s Advisor on Foreign Affairs Sartaj Aziz and Tajik Minister for Internal Affairs Ramazon Rahimzoda.

The Agreement on cooperation in the field of energy was signed by Minister for Water and Power Khawaja Muhammad Asif and Tajik Minister for Energy and Water Resources Usmonaly Usmon.
The Agreement for the establishment of the Joint Business Council was signed by President Federation of Pakistan Chambers of Commerce and Industry (FPCCI) Mian Muhammad Idrees and Head of the Chamber of Commerce and Industry of Tajikistan Sharif Said.
The MoU between the Ministries of Foreign Affairs of the two countries was inked by PM’s Advisor Sartaj Aziz and Tajikistan’s Foreign Affairs Minister Sirojidin Aslov.
The MoU for enhancement of cooperation in industrial sector as signed by PM’s Special Assistant Syed Tariq Fatemi and Tajikistan’s Minister for Industry and New Technology Shavkat Bobozada.
The Programme for Cooperation on `Exploitation of indigenous and exotic medicinal plants for herbal drugs’ was signed by Minister for Science and Technology and President of Tajikistan’s Academy of Sciences (TAS) Farhod Rahimi.
The Programme for cooperation between Pakistan Museum of Natural History and Tajikistan’s Institute of Geology, Earthquake Engineering and Seismology was inked by Minister for Science and Technology Rana Tanvir Hussain and President TAS Farhod Rahimi.
Earlier, PM Nawaz Sharif and President of Tajikistan held a one-on-one meeting and discussed ways to strengthen bilateral relations particularly in the areas of trade, energy and connectivity.
Nawaz Sharif said Pakistan attaches great importance to its relations with Central Asia particularly Tajikistan, which is geographically closest to Pakistan among all Central Asian states.

Stressing for establishment of air links between Pakistan and Tajikistan on priority basis, he said, connectivity holds key to the regional integration.
The Prime Minister said the relations with Central Asia are based on cultural and religious affinity dating back centuries and added that Pakistan wished to transform these fraternal ties into a strong economic partnership.
He recalled his recent visits to Turkmenistan, Kyrgyzstan and Tajikistan and apprised him of his upcoming visit to Uzbekistan on November 17.
He said these visits were aimed at further promoting bilateral cooperation and stressed to ensure implementation of initiatives taken and Agreements concluded during such high-level visits.
The Prime Minister expressed satisfaction that bilateral trade between Pakistan and Tajikistan had steadily risen to US$15 million in 2011 to US$89 million in 2014. He called for working arduously to achieve the target of US$500 million that had been agreed to achieve in three years in 2014.
On stronger connectivity, the Prime Minister said China Pakistan Economic Corridor (CPEC) would provide new opportunities for enhanced connectivity and integration from Gwadar to Kashgar. It will also provide a road link with Tajikistan through Murghab and other Central Asian states.
Prime Minister Nawaz Sharif said Pakistan was keen for implementation of CASA-1000 (Central Asia South Asia) project and expressed hope that the project would be completed by 2018.
Pakistan, he said, attaches great importance security cooperation with Tajikistan, and proposed to share the experiences on counter-terrorism, anti-narcotics, controlling human trafficking and best border control practices.
Tajik President Rahmon endorsed the Prime Minister for enhanced steps to further strengthen ties in areas of trade, energy, communication, security and defence, and people-to-people contacts.
====
Joint Statement between Pakistan
and Tajikistan

The President of the Republic of Tajikistan, His Excellency Mr. Emomali Rahmon, paid a state visit to the Islamic Republic of Pakistan from 11-13 November 2015, at the invitation of the Prime Minister of Pakistan, His Excellency Mr. Muhammad Nawaz Sharif.2. The President was accompanied by a high-level delegation comprising the Ministers, Senior Officials and prominent Businessmen. The President and his delegation were accorded a warm welcome.

3. President Emomali Rahmon had a meeting with the President of Pakistan and a tete-a-tete with the Prime Minister, followed by delegation-level talks. During their meetings, the leaders discussed a wide range of matters relating to bilateral relations and international and regional issues of mutual concern.

4. Both the leaders noted with satisfaction the steady growth in the bilateral relations and resolved to tap the vast potential in the areas of trade, energy, defence, agriculture, industry and regional transport communication networks.

5. To further promote economic cooperation, both the leaders emphasized the need to hold Joint Ministerial Commission meeting at the earliest.

6. The two leaders noted with satisfaction the formation of the Joint Business Council (JBC). They hoped that the areas of cooperation identified by the JBC will further boost trade between the two countries. They directed the JBC to hold regular meetings.

7. In the area of energy cooperation, both the leaders noted with appreciation the progress achieved in the implementation of CASA-1000 Power Project and hoped that the project would be completed by 2018. They instructed the Joint Commission on Energy and Infrastructure to hold its first meeting to further explore and identify new projects for export of electricity to Pakistan.

8. In order to facilitate trade and transportation between the two countries and in the region, the two sides reiterated their resolve to work with Afghanistan for early finalization and signing of Trilateral Transit Trade Agreement (TTTA).

9. Both the leaders commended the successful holding of Made in Pakistan exhibitions at Dushanbe on 29-31 October 2015 and reiterated the need to hold such national exhibitions in future in Pakistan and Tajikistan.

10. The two leaders recalled their understanding arrived at during the Prime Minister’s visit to Tajikistan in 2014 to increase the bilateral trade to 500 million US dollars in three years. They directed all concerned to take effective measures to achieve the target of bilateral trade.

11. President Rahmon expressed appreciation for the generous offers by Pakistan for human resource development in Tajikistan in various areas, in particular diplomacy and defence.

12. The two leaders recognized the importance of air connectivity for the promotion of people-to-people contacts, economic relations and tourism. President Rahmon welcomed the decision by Pakistan to permit Somon Air of Tajikistan to operate on Dushanbe-Lahore, Islamabad, Karachi, Faisalabad or Quetta sectors and hoped for early resumption of flight connections between the two countries.

13. The Prime Minister reiterated Pakistan’s offer to Tajikistan to use Pakistani sea ports for its imports and exports, these Pakistani ports provide the shortest route to the sea.

14. President Rahmon welcomed the development of China – Pakistan Economic Corridor, which will also facilitate connectivity between Pakistan & Tajikistan and other Central Asian States.

15. The Prime Minister reiterated Pakistan’s support to the request by Tajikistan to accede to the Quadrilateral Agreement on Traffic in Transit among China, Kazakhstan, Kyrgyzstan and Pakistan. This will further improve regional connectivity.

16. Keeping in view the security situation in the region, the two leaders emphasized the need to strengthen cooperation against threats of extremism and terrorism, cross-border organized crime, drugs and human trafficking and other threats to regional and global security.